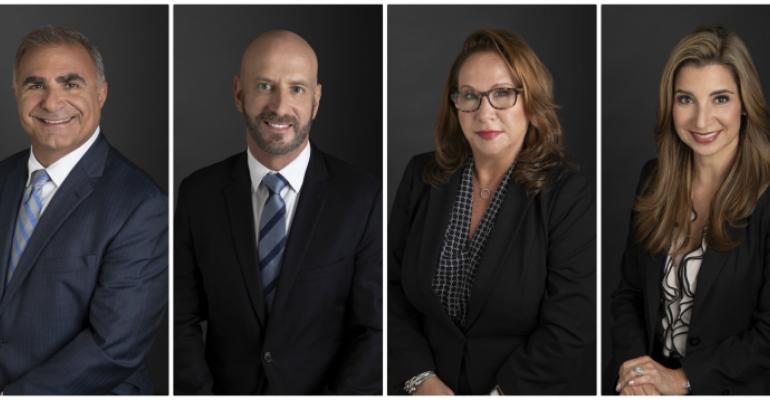 Cheryl Topalian, formerly with Voyages to Antiquity and Silversea Cruises, is reservations manager.

Atlas Ocean Voyages will sail the world, offering adventurous cruises for active people at a premium price point on vessels of about 200 berths. Since the line will not limit itself to traditional expedition climes such as Antarctica and the Arctic, it’s emphasizing adventures over expeditions.

‘We are an adventurous, small-ship cruise company with expedition-style vessels,’ Aliberti said. ‘We want to seek adventure wherever we are. We’ll have expedition itineraries, our ship will be expedition capable and ice capable, and we’ll have a full fleet of Zodiacs. The expedition capability is a given. But when we’re in Marseille, we won’t be on an expedition cruise.’

‘We’ll be upmarket. We don’t like the word “luxury”; it’s overused,’ Townsley added. ‘We’ll play off that juxtaposition of adventure and luxury.’

Adventures could include camping out in the rain forest, snorkeling in an underground cenote (a limestone sinkhole), whitewater rafting, desert hiking, hot-air ballooning, spending a night in a kibbutz and taking advantage of the ship’s fleet of bicycles. A robust pre- and post-cruise land program will provide opportunities for ‘two adventures in one vacation,’ Aliberti said, some of them providing contrasting experiences such such as as skiing in Switzerland before a Mediterranean cruise.

Atlas Ocean Voyages per diems will start at $650 to $750, with all-inclusive pricing as an option for agents to sell.

Extensive focus-group research showed that not everyone’s keen to pay for included alcohol. Excursions will cost extra and be bookable in advance, with agents earning commission for those as well as land tours.

The small ship World Navigator, third in a series of Mystic Invest newbuilds, will be the first of four vessels dedicated to Atlas Ocean Voyages. It’s under construction at WestSea Viana in Portugal and set to debut in mid-2021.

World Navigator will spend summer in the Mediterranean, with a heavy eastern Med focus including the Holy Land, before crossing from Lisbon to Rio de Janeiro, Rio to Buenos Aires, then Buenos Aires to Ushuaia, the base for a season in Antarctica.

Cruises will average 10 to 11 nights, with some weeklong itineraries and some longer voyages.

Research helped the company hone in on people who enjoy an active lifestyle and typically are members of clubs focused on activities like horseback riding, golf, tennis or swimming.

There will be a health and wellness program on board that may include a culinary aspect. And ‘We’ll have a culinary story,’ Townsley said, with an emphasis on authentic, local food.

Initially, customers will be sourced purely from the US and Canada.

There won’t be a kids’ program, but multigenerational families are welcomed.

Bookings are to open later this year. Meanwhile, Townsley plans to participate at retail conferences such as Travel Weekly’s CruiseWorld. Following wave season, he may undertake a road show, perhaps in partnership with a destination tourism board such as Israel.

‘We’re going to be focused on adventure cruising or adventure travel and finding those agents to become brand champions,’ Townsley said, In past cruise line jobs, he cast a wide net. For Atlas Ocean Voyages, ‘I’m going spear fishing,’ he quipped.

Portugal-based Mystic Invest, led by Mário Ferreira, branched into ocean cruising after establishing the Douro River as a thriving destination. Ferreira’s first ocean ship, World Explorer, entered service this year and sails on charter to Quark Expeditions and for Mystic subsidiary Nicko Cruises of Germany. Sister ship World Voyager, arriving in 2020, will have a similar arrangement.

Then comes World Navigator, which Aliberti said will be styled for North American travelers and have a casual dress code. ‘The public spaces will be adjusted to foster a sense of community and ease of interaction,’ he said. ‘We want people to be comfortable,’ whether they’re extremely active or laid back.

Atlas World Voyages’ office is located at 1 East Broward Blvd., Suite 800, in downtown Fort Lauderdale. The company has 7,600 square feet, with the option to expand over an additional 3,600 square feet. By year’s end, it will have 28 employees, including eight to 12 reservations agents, with up to 55 employees within four years, Aliberti said.