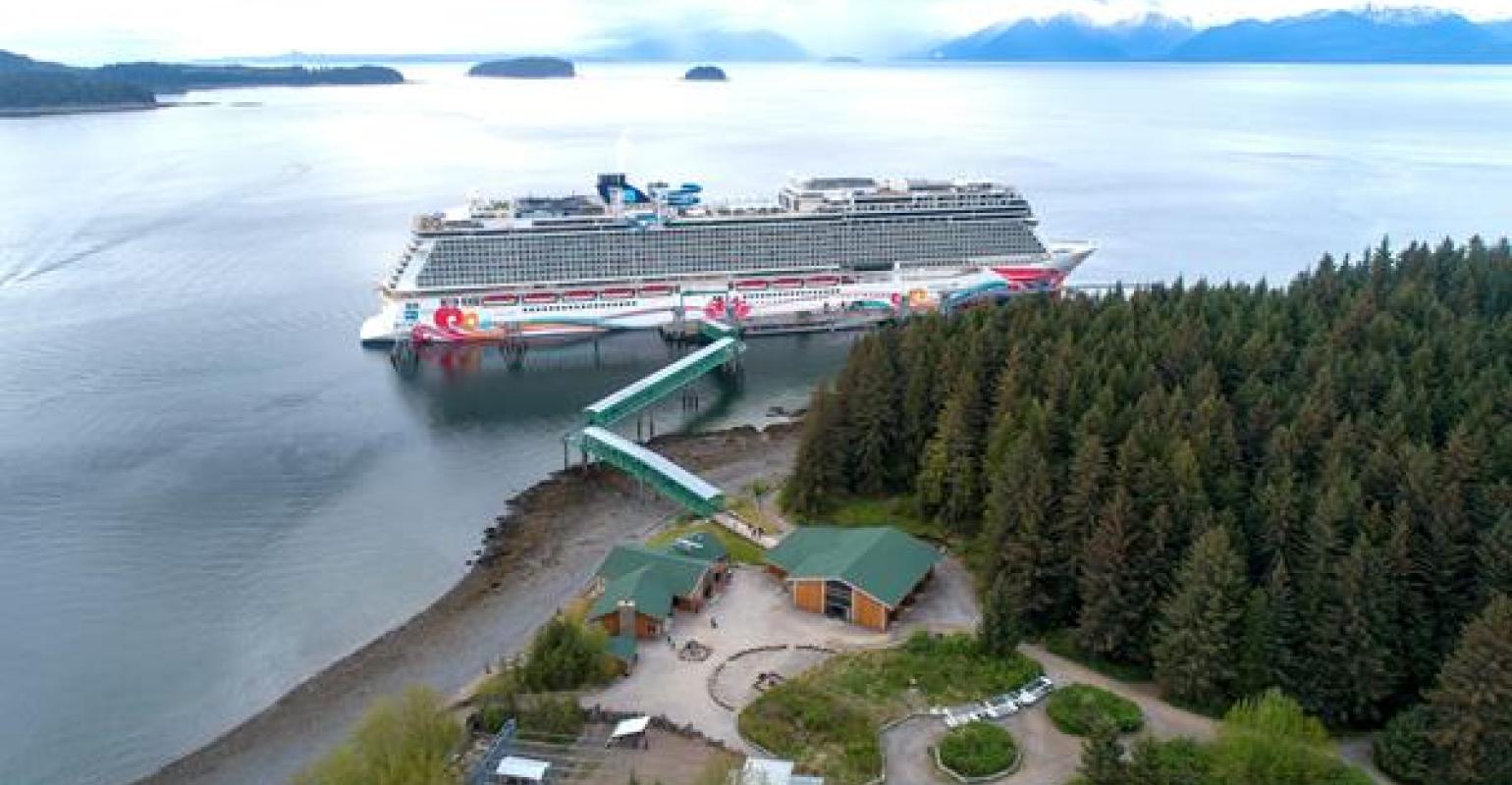 Norwegian Joy is pictured at Icy Strait Point, which will be getting a second pier and a bevy of new offerings by the start of the 2020 Alaska cruise season
Norwegian Cruise Line Holdings’ Icy Strait Point offerings will feature transport by a high-speed gondola, new mountain areas to explore including a suspension bridge over a canyon and additional adventure tours.

‘The natural beauty of Alaska makes it one of the most popular destinations to visit, and our investments in the region will enable us to provide our guests with a best-in-class experience as they explore the wonders of the Last Frontier,’ said Frank Del Rio, president and CEO, NCLH.

Scheduled for completion before next summer’s cruise season, the pier will be built to accommodate Norwegian Cruise Line’s Breakaway Plus ships. Sister brands Oceania Cruises and Regent Seven Seas Cruises will also get preferential berthing rights.

The new Wilderness Landing will be a vehicle-free zone, eliminating the need for an estimated 72 buses.

Passengers will move through the treetops between the Historic Cannery and Wilderness Landing on the Transporter, a high-speed gondola system installed by premiere lift manufacturer Doppelmayr Lift Systems. The gondola is wheelchair and scooter accessible and capable of moving more than 5,600 visitors per hour in eight-person cabins.

Opening a few months later, in mid-summer, a second gondola will take travelers up the 1,600-foot Hoonah Mountain to the forested area around the ZipRider launch. The six-minute ride will unlock additional areas for exploration and afford spectacular views of icefields, the Fairweather Range and Glacier Bay National Park and Preserve, the ancestral homeland of the Huna Tlingit people.

Huna Totem Corp. will develop the wilderness expanse with new attractions. A network of walking trails, a 340-foot suspension bridge swaying over a box-canyon with a 900-foot vertical drop and a tour departure center for bear searches, ATV adventures, helicopter flightseeing and more will be added during the 2021 season. An extended, top-of-the-mountain nature trail will loop around a glacially carved reflecting pond.

Norwegian Cruise Line recently was awarded a much sought-after concession contract through 2029 allowing its ships to sail within Glacier Bay National Park and Preserve. The contract went into effect Oct. 1 and gives NCL passengers access to one of Alaska’s must-see destinations.

In addition, passengers will hear from Cultural Heritage Guides accompanying each Glacier Bay sailing as part of a partnership with Alaska Native Voices.

As earlier reported, the company recently entered into a 30-year preferential berthing agreement with Ward Cove Dock Group that allows for construction of a new double ship pier in Ward Cove, near Ketchikan. The pier will be built to simultaneously accommodate two of Norwegian Cruise Line’s 4,000 passenger Breakaway Plus class ships and is expected to be ready for the summer 2020 season.

In addition, NCLH won a competitive bid for the last waterfront parcel in greater Juneau and is engaging local stakeholders, including government, business and community leaders, to develop a plan that it said would mutually benefit the city, its stakeholders and the company.