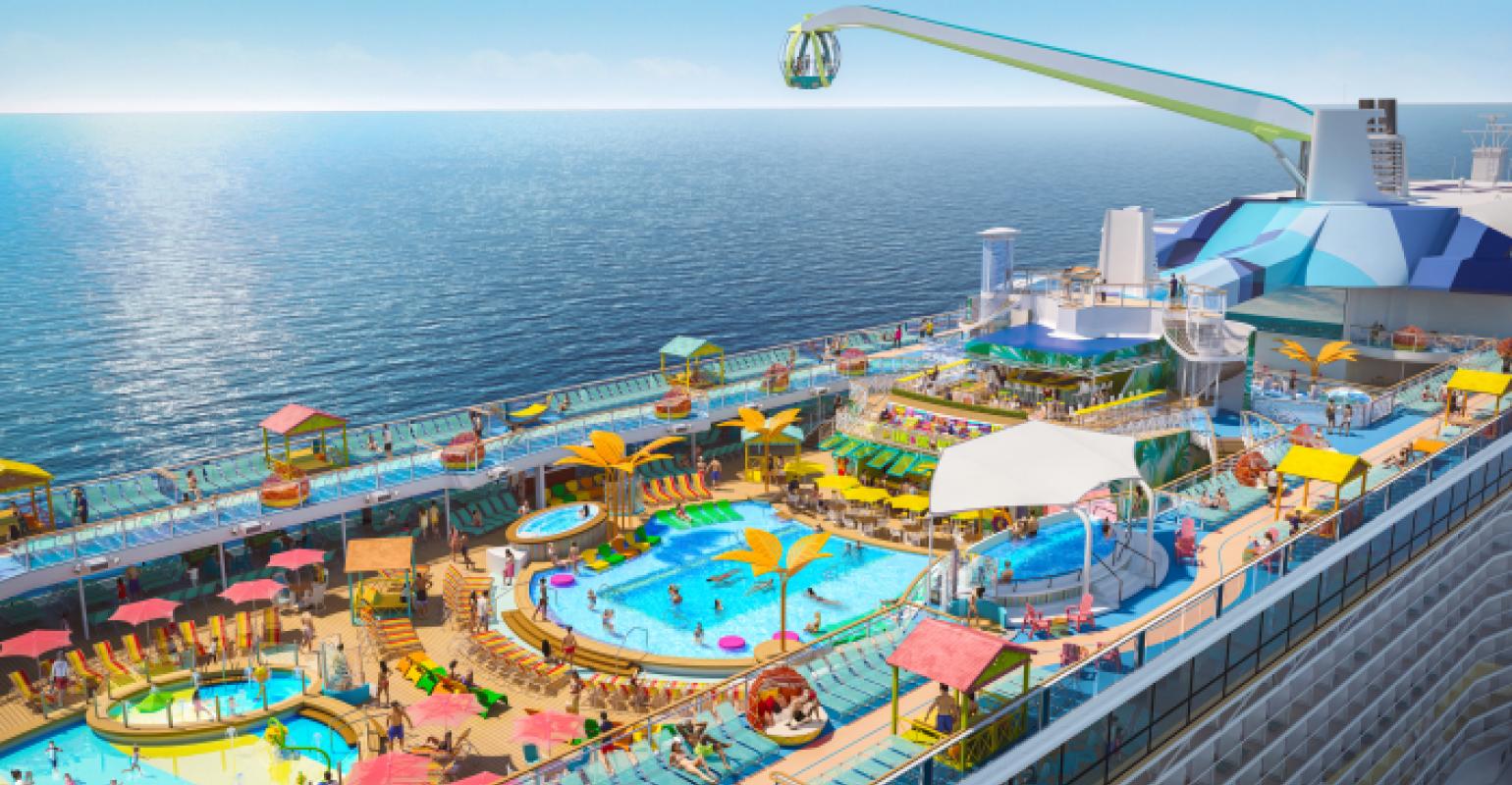 Odyssey of the Seas will have a two-level pool deck, where two resort-style pools, a kids' aqua park and four whirlpools are surrounded by shady casitas and hammocks

Odyssey of the Seas will be packed with new experiences

Odyssey of the Seas, the first Quantum Ultra-class ship for North America, will tout a new look to match the Royal Caribbean fleet’s most action-packed top deck to date.

Odyssey’s two-level pool deck, high-tech entertainment and varied restaurants will be set against the backdrop of the Caribbean and the eastern Mediterranean.

Highlights include the ultimate SeaPlex activity space and a reimagined Adventure Ocean where kids can choose their own immersive experiences across an entirely new layout, while a new teen lounge with gaming consoles, music and movies will provide hangout options indoors and outdoors on an exclusive patio.

The new Teppanyaki restaurant will serve Far East flavors, while Giovanni’s Italian Kitchen & Wine Bar will feature rustic Italian dishes with a contemporary flair. Entertainment will be punctuated by high-tech signature productions in the Royal Theater and Two70.

In November 2020, the ship’s inaugural year will kick off in the Caribbean with destinations like Curaçao, Aruba, Grand Cayman and Mexico on eight- and six-night itineraries from Port Everglades. Odyssey will then sail to Civitavecchia (Rome) in May 2021 and become the first Quantum Ultra-class ship to cruise Europe for the summer.

Travelers can visit destinations in Turkey and Greece while Odyssey will share a new perspective from 300 feet above sea level in the iconic North Star glass capsule with its 360-degree views.

Odyssey will introduce the next generation of Royal Caribbean’s SeaPlex, the largest indoor activity space at sea. An interactive arcade will dominate the upper level of SeaPlex with VR games for individual and group play, augmented reality walls and floors for high-tech competitions and family experiences.

The full-sized sports court offers bumper cars and a flying trapeze and will double as a glow-in-the-dark laser tag arena, pitting Yetis and Snow Shifters against each other as they battle for survival and control of the mythical ice city in ‘Clash for the Crystal City.’

Playmakers Sports Bar & Arcade gets a prime location within SeaPlex, with TVs at every angle to cheer on the home team. Offering club-level views of the competition below and onscreen, Playmakers will let sports enthusiasts catch every play on the court and back at home. Gameday bar fare like buffalo wings, sliders and the signature Playmakers Burger will be served alongside cold brews.

Also here: classic board games, what’s touted as the most interactive arcade at sea, trivia and pool, along with the Owner’s Box VIP area for an MVP experience.

Plus, FlowRider, RipCord by iFly and SkyPad

Other features include the FlowRider surf simulator and skydiving simulator RipCord by iFly, a 40-foot rock wall and SkyPad, the bungee trampoline experience that transports travelers to another time, place or planet using a VR headset.

The youngest globetrotters can head to Splashaway Bay, an aqua park of colorful waterslides, fountains, water cannons and more. Adults can retreat to the Solarium, an exclusive space on the top deck with swimming pools and whirlpools, a full-service bar, daybeds and hidden nooks for relaxation.

Two70, with its 270-degree panoramic windows, transforms in plain sight into a 135-foot-wide and 22-foot-tall screen via Vistarama technology. As day turns into night, the iconic venue at the aft of the ship becomes a multidimensional theater where a troupe of six agile Roboscreens come to life in sync with music, special effects and multitalented live performers and aerialists.

Music Hall, meanwhile, will provide a changing set list of live performances in a space for dancing or lounging.

Teppanyaki will serve authentic oriental flavors cooked in one of Japan’s traditional styles. Steaks and seafood are prepared and served with a sizzle at the table. Also joining the lineup is Giovanni’s Italian Kitchen & Wine Bar, Royal Caribbean’s new take on its signature Italian trattoria.