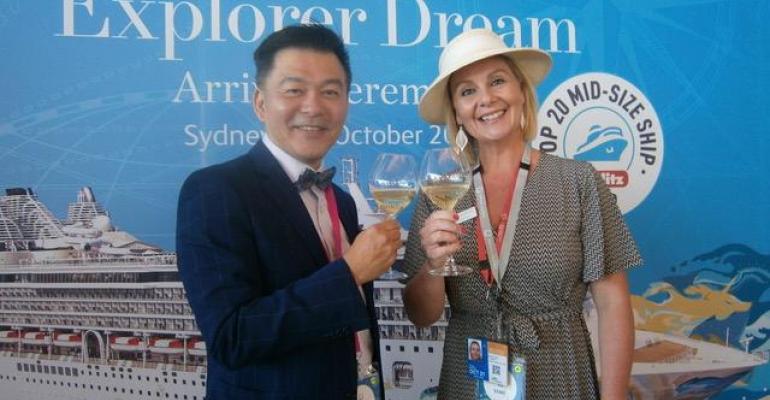 Michael Goh celebrates the arrival of Explorer Dream with Brigita Devries, VP sales, Australia and New Zealand, Genting Cruise Lines PHOTO: Helen Hutcheon
A beautiful ‘mermaid’ was the highlight of a spectacular show on board Explorer Dream when she arrived in Sydney Sunday on her maiden voyage.

The ship’s male dancers put on a performance that many of the media and travel agent guests said rivalled Cirque du Soleil.

Mermaid goes for a swim

At the height of the routine the real-life mermaid, a look-alike to the one painted on the hull by New York-based Chinese artist Kuri Huang, dived into the pool.

‘Dream Cruises is excited to begin a new chapter as we chart new waters beyond Asia to homeport in Australia for the first time,’ said Michael Goh, president of Dream Cruises and head of international sales for Genting Cruise Lines.

Following its inaugural 2019/20 season in Australia from now until March next year, Explorer Dream returns to Australia and New Zealand in 2020/21.

‘We will develop new destinations in Australasia,’ Goh said.

The company’s slogan is ‘Asian in heart, international in spirit’ and Goh said sailing beyond Asia for the first time is a milestone in Dream Cruises’ aspiration to be ‘Asia’s global cruise line.’

Genting, which currently has a fleet of three ships — Genting Dream, World Dream and Explorer Dream — will have a fourth ship, Global Dream, in 2021 and a second Global-class ship, yet to be named, in early 2022.

Goh said Australia was a logical destination for the company’s debut out of Asia because Explorer Dream, which was Star Cruises’ SuperStar Virgo, had relocated to Sydney from Singapore in 2003 following an outbreak of SARS (severe  acute respiratory syndrome).

However, he said, with five ships in the future, the company plans to expand its itineraries to places like Alaska and the Baltic.