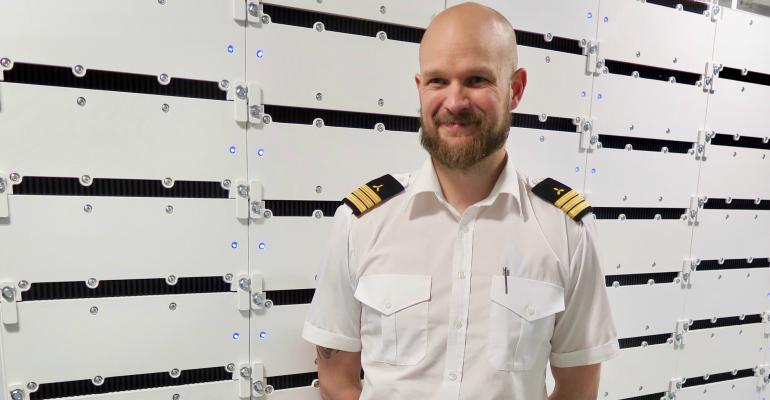 It was fitting that Roald Amundsen’s maiden call at Vancouver, BC, coincided with Friday’s climate strike there because Hurtigruten is making big strides to reduce its greenhouse gas emissions.

The cruise industry is a ‘huge contributor of greenhouse gas emissions. We are contributing to global warming. That’s why we as a company have chosen to lead,’ he told a group of US and Canadian travel advisors and media touring the ship.

Hurtigruten believes people don’t want to visit nature places on ships burning dirty heavy fuel oil. So the company has committed to using only MGO, and is investing to develop battery power and liquefied biogas.

'We walk the walk'

‘We don’t just talk the talk. We walk the walk.’ Skjeldam said. ‘It’s important that we as an industry invest in innovative solutions that are not paying back immediately.’ Hurtigruten sees more immediate promise in biogas than batteries, since Skjeldam doubts it will be possible to sail 20 hours on batteries any time soon.

He also doesn’t think LNG is the answer, but it becomes more attractive when paired with biogas, made from dead fish and other organic waste.

Besides building hybrid electric ships, Hurtigruten is dramatically updating several existing vessels with lower-emission (Tier III) engines, and capability for shore power and battery systems. By 2021, the company plans to operate at least six of its 17 ships using a combination of liquefied biogas, LNG and batteries. From then, seven ships will be in expedition service, all fully refurbished, with four to operate year-round on the Norwegian coast.

‘We think a lot of guests of the future will really care about sustainability,’ Skjeldam said. ‘Our goal as a company is to operate 100% emissions-free.’

The Norwegian government, he noted, has vowed the Norwegian fjords will be emissions-free by 2025. ‘If we do it, other countries can’t say it can’t be done.’

Welcoming Roald Amundsen’s maiden call, Port of Vancouver President and CEO Robin Silvester called the ship a ‘green pioneer,’ adding: ‘Our vision is to be the world’s most sustainable port. It is a pleasure to work with partners who share those values.’

Roald Amundsen’s namesake, the great Norwegian polar hero — first to traverse the Northwest Passage and to reach the North Pole and the South Pole — had imagined an electric ship as a 10-year-old in 1882.

‘In 2019, Hurtigruten makes Roald Amundsen’s dream come true,’ Skjeldam said. The ship is not 100% electric, but it can run on stints of up to 30 minutes just on battery power. However, the batteries’ regular application is peak shaving, which helps cut fuel consumption by 20%.

Vancouver-based Corvus Energy developed the lithium-ion battery systems for Roald Amundsen and for 2020 sister ship Fridtjof Nansen. According to Skjeldam, the company expects to realize a 400% improvement in its next-generation batteries, due on the market in 2021.

Other lines looking at battery power

Corvus is also supplying AIDAperla, which will have the largest battery system in passenger shipping, with total output of 10 MWh. Other cruise operators considering batteries include Royal Caribbean for its Icon class, SeaDream Yacht Club for expedition newbuild SeaDream Innovation and MSC Cruises for its new luxury brand.

Aboard Roald Amundsen, the batteries are among the things visitors are most eager to see. They’re housed in two air-conditioned chambers in the engine room. Arranged in six columns of 20 batteries each, they take up surprisingly little space. Hurtigruten designed ample room, anticipating the use of more batteries in future.

Together, the two systems can provide 1.35 MWh.