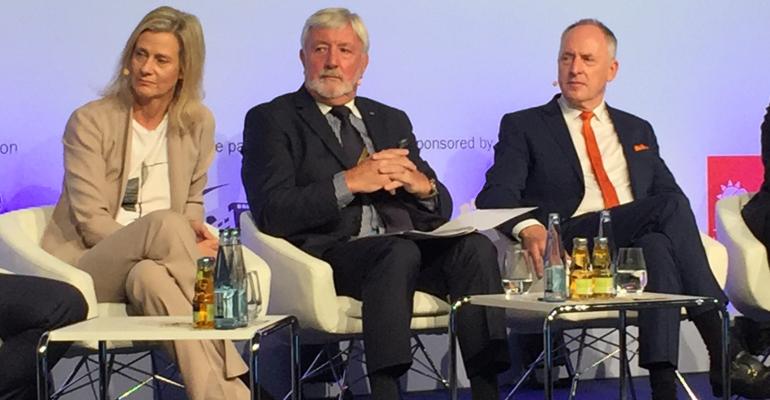 CLIA Europe chairman Michael Thamm addressed the opening of Seatrade Europe in Hamburg with a strong message to delegates that value creation, responsible innovation and sustainable tourism are among the key priorities for the cruise industry.

In a panel discussion which followed, Capt. Michael McCarthy, Chairman of Cruise Europe, called on individual cruise lines, as well as CLIA, to increase using ports as industry ambassadors and an interface to local stakeholders on sustainability matters.

McCarthy said sustainability was an issue which can be solved, but at the same time he outlined that ports need tools to answer incoming questions for example related to overtourism fears and what the ships are emitting into the air and into the waters. He added that member ports of Cruise Europe are increasingly facing questions related to operational matters.

A great story to tell

Sustainability issues and local overtourism concerns were key topics as port and cruise line executives debated the state of the industry at the opening of the Seatrade Europe Cruise & River Cruise Convention which started at Hamburg Wednesday.

It became clear that, while cruise operators and ports globally work hard to implement green strategies, this is not sufficiently perceived by parts of the public.

Much seconded by the panellists was a statement of Thamm, who claimed in his keynote address that the industry's current public image ‘does not reflect who we really are’.

Felix Eichhorn, President of AIDA Cruises, reminded of recent sustainable achievements including LNG propulsion and the increasing use of shore power.

Karl J. Pojer, CEO of Hapag-Lloyd Cruises, added cruise clients had a highly different meaning than certain public groups. He called, in line with the other cruise line panelsist for transparency and active information.

RCCL's SVP International, Gavin Smith, reminded of the fact that the industry was cooperating in different forms to address sustainability issues and bring the industry's environmental footprint down. ‘The industry has a great story to tell. It is on us to tell that story,’ Smith said.

McCarthy stressed ports could become an important channel to tell this story locally.

Dialogues as a key to achieve local acceptance

Reviewing the activities of his company in various European countries, including Norway, Felix Eichhorn said teamwork was a key to increase acceptance of cruise tourism locally and of the whole industry in a wider context.

Claiming cruise lines were the first joining discussions if a destination felt a danger of overtourism, Eichhorn added that the operators could effectively contribute to organise and steer passenger flows in order to avoid crowding.

Eichhorn also said that the perception of cruise tourism greatly varied between destinations. Citing the example of Geiranger in western Norway, Eichhorn claimed people there were actually striving to increase passenger volumes in order to create additional workplaces and to keep local people living in the area.He claimed this example documented there was not just one standard answer to increase and secure the acceptance of cruise tourism at destinations.

Supporting dialogue and teamwork approaches, McCarthy said that 64% of Cruise Europe's member ports are located in cities/towns, adding that ships arriving in the early morning rush hour often caused concern at such places, as tour buses typically depart around 08:00 hrs, right at the peak of morning traffic when also many locals drive to work, take their children to school, etc.

He said dialogue could achieve easy-to-implement solutions for such problems, for example a re-scheduling of arrivals to 08:00 hrs with tour buses departing around 09:00 hrs, i.e. after the end of the roadside morning rush hour.

‘This is the type of dialogue that everyone can contribute to,’ McCarthy summarised. He also voiced criticism about cruise lines' decisions to call remote ports and transfer passengers by bus, rather than to go to the eventual destination directly, if that is possible. In that context McCarthy cited the example of Ijmuiden, suggesting operators wishing to show Amsterdam to their passengers should rather call that port – instead of berthing at Ijmuiden and causing intense road traffic by taking the guests to Amsterdam with large numbers of coaches.