Spirit of Discovery is named in Dover by Duchess Camilla 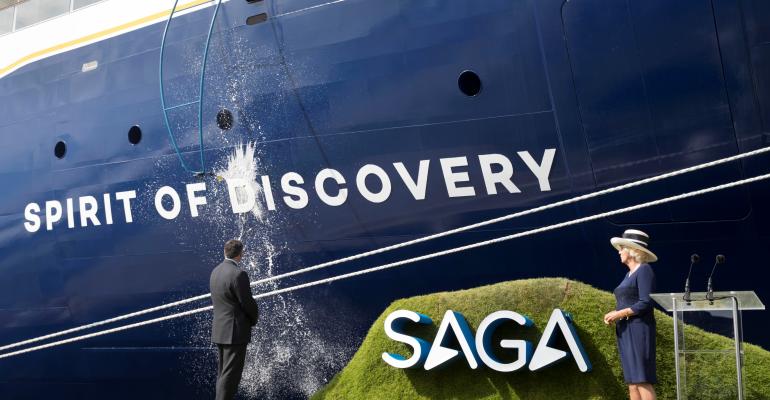 Britain’s newest luxury cruise ship Spirit of Discovery has been officially named by the Duchess of Cornwall at a lavish garden party in the historic port of Dover.

Camilla sent a jeroboam of English sparkling wine smashing against the side of the £364m ship — the first cruise ship to be named at the Port of Dover in more than a decade.

The sun shone on Camilla, who perfectly co-ordinated with the livery in a navy long-sleeved dress and sweeping cream hat, and declared: 'I name this ship Spirit of Discovery.'

The very British celebration continued with moving music from The Band of Her Majesty’s Royal Marines Collingwood, and the Morriston Orpheus Choir, from Swansea, Wales, which brought tears to eyes with renditions of 'Impossible Dream' and 'You’ll Never Walk Alone.'

Saga Cruises is for travellers over 50 and Camilla said she couldn’t resist offering a ‘wonderful quotation by TS Eliot.' She said: 'The years between the years age 50 to 70 are the hardest — you are always being asked to do things and yet you are not decrepit enough to turn them down.'

Camilla also praised Saga’s charitable endeavours and as Patron of SilverLine, she said: 'I am delighted to learn that Saga’s first national charity is Silverline, which provides a 24-hour telephone service for older people who are feeling lonely or isolated.'

Camilla toured the ship with Capt. Julian Burgess and Saga executives, where she was able to see for herself how the elegant lines of the ship carry though into the interior design.

Although Camilla did not hesitate about the ship naming, when it came to cutting a three-metre cake in the shape of Spirit of Discovery she stopped before doing the honours, telling patisierre Mark Tilling, BBC Two’s 'Crème de la Crème Bake-Off' winner, 'It seems such a shame to cut it!'

Saga CEO Lance Batchelor told guests Spirit of Discovery represents ‘our country at a momentous time’ and proudly bears the red ensign for her registry in the Port of London. He said: 'Saga has a proud heritage, and this ship represents the rebirth of our company.'

CEO Saga Travel Robin Shaw said the 999-passenger and 523-crew ship ‘set a new standard in small ship luxury cruising.' He added: 'Spirit of Discovery is the first cruise ship to be built by a British company in decades and we are proud to homeport in Dover, where the Western Docks are undergoing a £250 million redevelopment.

'We couldn’t be more honoured than to have HRH The Duchess of Cornwall joining us for this prestigious day.'

Doug Bannister, chief executive of the Port of Dover said: 'We are really proud to host the naming ceremony for Saga’s first newbuild ship, 20 years after Saga cruises officially launched here in Dover. This is testament to the outstanding partnership we have built with Saga and represents an exciting future for us as a port, as we take a step closer to fully unveiling our Western Docks redevelopment.'

A Spitfire plane flew over the port as more than 500 guests celebrated at the British garden party alongside Terminal One, a picturesque scene with a floral-filled marquee and real grass brought in from Yorkshire. The specially blended Spirit of Discovery sparkling wine was served in a marquee with afternoon tea.

Spirit of Discovery’s maiden voyage departs July 10. The 13-night sailing, 'A British First,' circumnavigates the British Isles and Ireland – and shows off Saga’s new ship to her potential passengers in Newcastle, Edinburgh, the Orkney Islands, Belfast, Dublin, Liverpool, Guernsey and along the south coast.