In Windstar Plus milestone, Breeze cut in half and ‘stretched’ at Fincantieri Palermo 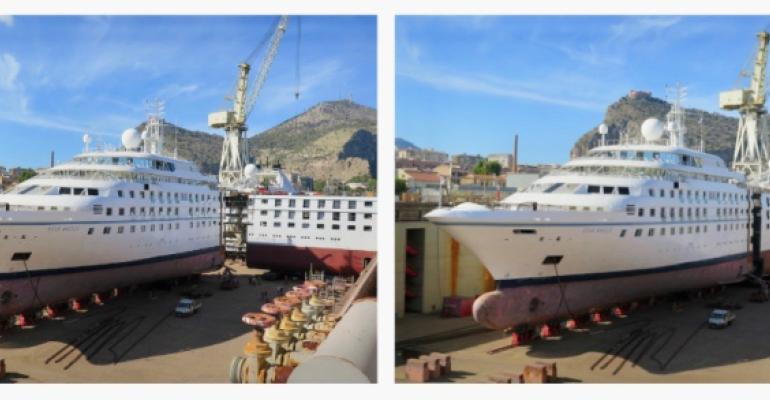 The final welding cut to Windstar Cruises’ Star Breeze was completed Wednesday evening by company President John Delaney and today the ship’s 25.6-meter/84-foot prefabricated midsection was glided into place between the two halves in the drydock, an operation that took just half an hour.

'The baby is born'

‘The baby is born,’ said a smiling Isabel Landzic, Fincantieri project engineer, looking on with satisfaction. ‘This was a yacht. Now it’s a cruise ship.’

Scores of Fincantieri workers and managers, Windstar executives and a handful of top cruise retailers and media watched the operation with all the concentration and awe of people witnessing a spaceship launch.

‘It’s pretty surreal to stand here and see this ship split apart after more than two years of planning,’ Delaney marveled. He, too, was smiling, after the novel experiences of completing the welding cut and later standing in the dock, with Star Breeze balanced on skid shoes towering overhead as the 750-ton midsection advanced on a track, then pivoted and turned into the open space between the bow and stern portions.

‘My little baby is becoming a big baby. It will not be very big but quite different,’ said Christopher Prelog, VP fleet operations, Windstar. ‘It’s a good size, and we can offer a lot of new things.’

As part of Windtar’s $250m Star Plus Initiative, Star Breeze and sisters Star Legend and Star Pride are being lengthened, each in a stunningly short four-month stint. The work will add 50 suites per ship, re-do all accommodations and expand dining choices, the spa, fitness center and pool deck. Two new restaurants include the eclectic, Spanish-styled Cuadro 44 by Anthony Sasso and a modern, alfresco Star Grill by Steven Raichlen.

‘It’s not just a ship lengthening. It’s a complete transformation,’ summed up John Gunner, VP expansion projects for Windstar and a veteran of numerous newbuildings during his earlier long career with Princess Cruises.

A major aspect is the re-engining, which will make for far greater fuel efficiency, reduce harmful emissions, meet the environmental regulations and add 4 knots to the cruising speed, opening new, far-flung destinations for Windstar like New Zealand.

Seven engines (four for propulsion and two for electricity needs) are coming out of Star Breeze. Going in are four Wärtsilä 26 diesel engines (two V12 for propulsion and two 8-cylinder for electricity) that meet the highest (Tier III) nitrogen oxide emissions standards. The ship also will be fitted with selective catalytic reduction converters to further reduce harmful exhaust.

Gunner said the steel work done at Palermo is as good as he’s seen anywhere, and the progress so far has further boosted Windstar’s confidence in Fincantieri.

Windstar executives related how numerous yards bid for the project but Fincantieri stood out for its solution-oriented approach. While others emphasized the challenges, Fincantieri continuously proposed ways to overcome the challenges.

The Palermo yard has completed 34 ship lengthenings, including Silver Spirit, MSC Cruises’ Renaissance program, ferries and barges, according to Andrew Toso, VP ship repair and conversion, Fincantieri Services Division. ‘This is a little more complex than we’ve done in the past,’ he said.

‘Small is the new big’

On hand for the final cut and midsection placement, Van Anderson, co-founder of Avoya Travel, said the Star Plus Initiative is good for the trade, good for consumers and good for the environment.

Avoya has been booking clients on Star Breeze since it entered service as Seabourn Spirit in 1989.

‘It’s getting a new life,’ Anderson said. ‘It feels good to be able to continue to sell a ship with history instead of putting her out to pasture. We don’t do that with hotels. We stay in hotels and resorts because of their history.

‘There’s nothing wrong with new ships. We need growth,’ he continued. ‘But small is the new big. It’s a new opportunity.’

Adam Martindale of Cruise Planners, a specialist in culinary and wine travel, welcomed their greater size because that affords more public spaces, which appeal to groups. Having the two new restaurants will be a real plus for his clients, he said.

Star Breeze is scheduled to emerge from its transformation and resume service on Feb. 20 in Barcelona, with re-inaugural activities in North America planned on March 19 at PortMiami.