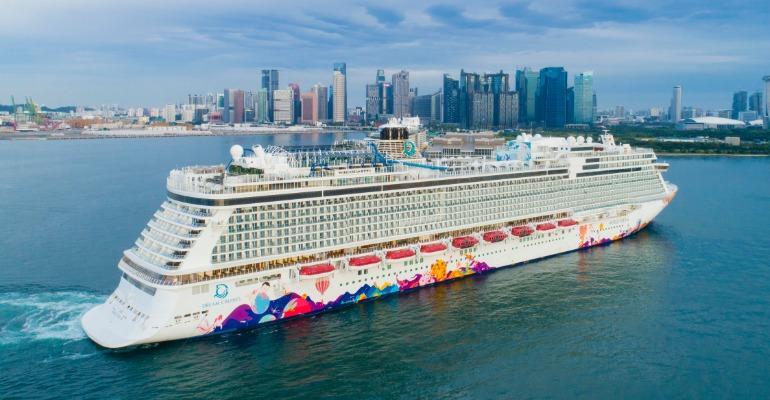 Genting Hong Kong filed to wind up its Dream Cruises division and appoint joint provisional liquidators while also advocating for the brand's restructuring and continuation.

'The company is of the view that a consensual restructuring will present higher recoveries to all creditors and stakeholders compared to a value-destructive liquidation of the Dream Sub-Group, which is the likely alternative outcome,' Genting HK said in a filing. 'The Dream Sub-Group remains valuable, and there are transactions which can be pursued which are likely to realise better value for the Dream Sub-Group’s creditors than a formal and terminal liquidation scenario.'

The filing continued: 'The joint provisional liquidators are in discussions with both the company’s and Dream Cruises’ management teams in order to assess urgently the financial condition of the company and the Dream Sub-Group, and to identify potential remediation plans.'

Dream ships have been operating

Dream Cruises fields three ships: Explorer Dream (the former SuperStar Virgo) as well as the bigger, newer sisters Genting Dream and World Dream. With some pandemic-related stops and starts based on local health regulations, Explorer Dream has been operating from Taiwan (its July 2020 restart was one of the earliest pandemic cruise comebacks), Genting Dream from Hong Kong and World Dream from Singapore.

Until recently, a larger newbuild, Global Dream, at 208,000gt with 4,700 lower berths and total capacity for 9,500 passengers, was under construction at Genting HK-owned MV Werften. It was delayed but expected for delivery this year until the shipyards group filed for insolvency earlier this month, triggering cross-defaults in loans that led to Genting HK — also the parent of Star Cruises and Crystal Cruises — filing to wind up its business.

No mention of Star Cruises or Crystal Cruises

In that earlier filing, Genting had signaled the hope Dream Cruises would continue but did not mention Star Cruises or Crystal Cruises: 'Certain business activities of the group, including but not limited to the operations of cruise lines by Dream Cruises Holding Limited, shall continue in order to preserve and protect the core assets and maintain the value of the group; however it is anticipated that majority of the group’s existing operations will cease to operate.'

Investment group Darting (controlled by TPG Capital Asia and Growth Funds and indirectly by OTPP, the administrator of Canada’s largest single-profession pension plan) bought a 33% stake in Dream for $459m in 2020 and last year pumped an additional $59m into the company.

The proposed joint provisional liquidators for the Dream Sub-Group are the same as those acting on Genting HK's behalf: Edward Simon Middleton and Wing Sze Tiffany Wong of Alvarez & Marsal Asia Limited in Hong Kong and Edward Alexander Niles Whittaker of R&H Services Limited in Bermuda.

NCLH Q1 loss wider than expected but bookings have rebounded
May 10, 2022