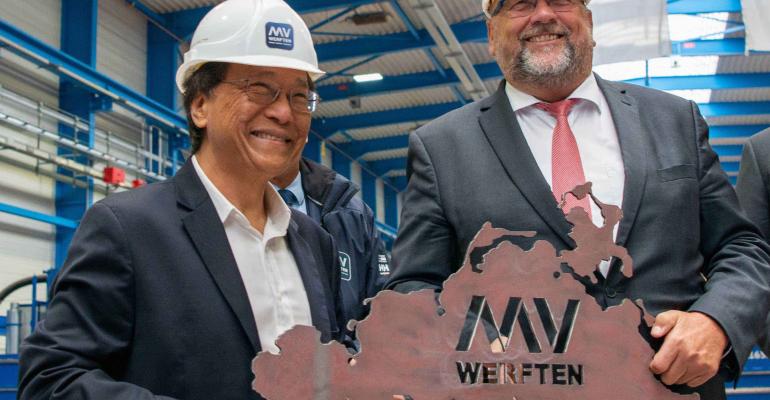 Tan Sri KT Lim, left, at MV Werften's steel-cutting for the second Global-class newbuild in September 2019
Genting Hong Kong held its first creditors meeting Monday as it pursues a restructuring. Leading up to the virtual meeting, the company paid bank fees that were due last week.

Previously, Genting HK reported missing the payment of €3.7m in bank fees relating to newbuilds Global Dream and a sister vessel. That constituted an event of default. Other events of default had already occurred, and these could give rise to the right of creditors to declare debt owed to them immediately due and payable.

Chairman and CEO Tan Sri KT Lim said Genting HK would discuss an orderly process for reaching agreement with respect to a 'solvent, consensual and inter-conditional restructuring solution' for the group.

Lim added that where the board considers it to be in the best interest of all stakeholders, the board shall consider paying interest and charter payments as they fall due based on pre-existing terms.

Last week Genting HK announced it would suspend payments to creditors to preserve as much liquidity as possible and to treat all its financial creditors fairly and equitably.

The company appointed PJT Partners as its financial adviser and Kirkland & Ellis as its legal adviser to implement the restructuring. Creditors were invited to contact PJT Partners.