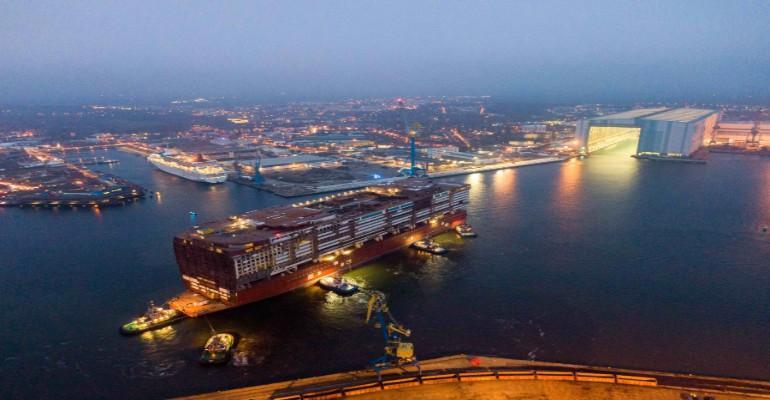 A pending €300m in subsidies from Germany are primarily to ensure the completion of Global Dream. Here, the ship's midsection was transferred to MV Werften's Wismar facility in late 2019
Worries about Genting-owned MV Werften grew acute Friday as employees were informed their December salaries will be paid only next week. This follows Genting Hong Kong halting trading today pending an announcement.

In an interview with the local NDR news station, MV Werften's MD Carsten J. Haake said it was not possible to pay salaries today due to certain legal conditions, though he stressed enough cash was available. Haake said liquidity amounts to €30m.

Negotiations about financial aid provided to MV Werften by the state and Germany's federal government have been dragging on for some time.

With the Delta and Omicron variants impacting the recovery of Genting HK's cruise operations, the company sought to mitigate the risk of breaching its minimum liquidity covenant by drawing down on the €78m backstop facility provided by the state.

In a statement, Genting HK said it had satisfied draw-down conditions including $30m funding provided by controlling shareholder Golden Hope in December. The company said Mecklenburg-Vorpommern imposed additional pre-conditions for the drawdown so Genting HK went to court.

Initially the Schwerin district court ordered the state to pay the full €78m but subsequently reduced the amount to an immediate partial payment of €5.6m before then deciding no amount is immediately payable and scheduling a hearing for Jan. 11.

The state's €78m is supposed to act as a backstop until subsidies amounting to €300m are provided by the federal government. In return, the federal government requires certain contributions by Genting as owners of MV Werften, including €60m and a guarantee MV Werften will continue operating. The €300m is primarily to ensure the completion of Global Dream.

Genting believes its contributions required as a pre-condition for the financial aid to be fulfilled already.

Genting's legal action surprised many in Mecklenburg-Vorpommern and beyond. Last week the state's ministry of economy expressed irritation over the injunction filing but said negotiations would continue.

The Mecklenburg-Vorpommern financial committee on Wednesday discussed the MV Werften issue, with Finance Minister Heiko Geue stressing it was important for Genting's flexibility to pave the way for the federal government's aid. While most in Mecklenburg-Vorpommern's parliament still support the attempts to rescue MV Werften, many MPs are unhappy about Genting going to court.

An MP of the oppositional Alternative für Deutschland, in contrast, criticised the state government for having no Plan B in case a settlement isn't reached with Genting. Some critics are also warning against a 'permanent rescue' scenario since Mecklenburg-Vorpommern's shipyard industry has been in a challenging situation for a long time. The Association of Taxpayers warned against further subsidies, with the deputy regional chair stating the entire rescue structure for MV Werften was on shaky legs from the very beginning.

Insolvency would have dramatic consequences

An MV Werften insolvency could be disastrous for Mecklenburg-Vorpommern with its struggling economy and high unemployment rate. It would be difficult for shipyard workers to find other employment locally.

However, in Germany, insolvency doesn't necessarily spell the end to an enterprise. It also can pave the way for a restructuring. This would not be the first for the MV Werften yards.