Crew vaccination, hotel inventories and re-training in focus as industry gets ready for resumption 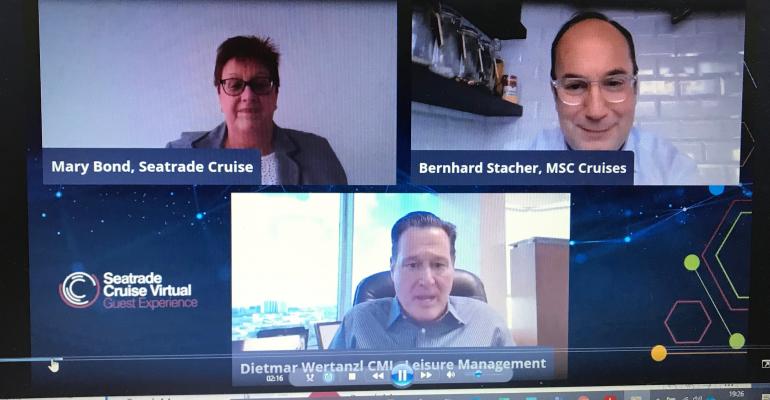 Getting crew vaccinated, figuring out on-board hotel inventories, managing delivery of supplies to ships and re-training staff are just some of the challenges facing cruise lines gearing up for resumption or expanding operations.

MSC Cruises has been sailing in the Mediterranean since August but ‘earlier on in the lockdown and prior to restarting we spent a lot of time remodelling our operations and drafted multiple frameworks for 30%, 40%, 50%-plus load factors,’ said Stacher.

Speaking on the smaller vessel sector, and in particular, the Arctic expedition season and  Antarctica, Wertanzl said, ‘There is a lot of uncertainty over whether the Norwegian government will allow us to operate in Svalbard this year. And for Antarctica we are planning to base eight ships in Ushuaia in [austral summer] 21/22 so we need to go full speed on sending containers with supplies to South America during June/July in advance of the ships arriving so are talking to governments, shippers and suppliers whilst re-engaging with crew.’

Both have been focussing on gathering data on the inventory left on board when ships went into lay-up and ramping up delivery of new supplies with pre-COVID lead times of 30 days now looking more like 60-90 days as suppliers assess their own stocks and logistics of delivery times, noted Wertanzl.

As for vaccinating returning crew and having right numbers in the right places, Stacher addressed sourcing crew from multiple nations which are at different stages of their vaccination programmes.

‘If we are talking three ships that’s fine but if we start to think of deploying 10 ships then some of the crew may have found alternative employment in the past year and there is a real possibility we will have to hire and train new staff,’ said Stacher who is currently looking at hotel operations for deploying MSC Virtuosa to the UK and introducing newbuild MSC Seashore.

‘Our senior leaders are working with multiple regulatory and government bodies as a priority as some countries have put crew in their top priority lists for getting vaccinated but we have crew coming from so many different countries, having had different types of vaccine and we just don’t know if they will be recognised by another country the other side of the world,’ he added.

Wertanzl said, ‘We are predicting 90% of our crew will come back but CMI’s managed fleet is in growth mode and we will be introducing three newly delivered ships in Antarctica in the fall so need to hire 30% new crew for those.’

Crew training, including ramping up online modules, is at the forefront now for both panelists and moderator Seatrade’s Mary Bond asked Stacher if ZOE, MSC Cruises’ virtual personal in-cabin cruise assistant has been updated to cover COVID-protocol measures on board. ‘Yes, we have updated the Q&As such as where do I need to wear a mask; where can I get a mask,’ commented Stacher.