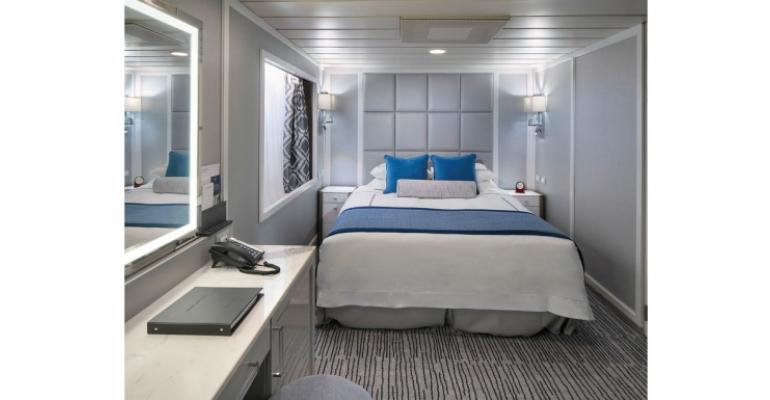 Oceania Cruises is adding dozens more dedicated rooms for solo travelers along with 'Go Green' and 'Beyond Blueprints' shore excursions.

Each of Oceania's four ships will feature 14 solo ocean-view staterooms, which debut aboard Regatta, Nautica, Insignia and Sirena in late September and early October. The addition of these 56 staterooms, follow those that debuted to a sell-out success on Vista earlier this year.

'Our guests and travel partners wanted more options for solo travelers and more diverse tour offerings, and we are delighted to deliver,' said Howard Sherman, president and CEO of Oceania Cruises.

Bathed in soothing tones with multiple layers of luxurious furnishings, accents and artwork, solo staterooms on the four existing ships will be entrally located on Deck 6. Each is equipped with a plush Tranquility Bed, refrigerated mini bar, cozy seating area and abundant storage space.

Pricing and availability will open April 11.

Passengers will have a choice of more than 150 'Go Green' tours around the globe. Examples include visiting a sustainable vineyard in Almeria, Spain; learning about hydroponic farming in the rain forests of St. Kitts; discovering eco-conscious art in Buenos Aires; and imbibing in zero-emission rum in the world’s only carbon-free distillery in Dartmouth, UK.

The 'Beyond Blueprints' tours offer an in-depth look behind the scenes at iconic architectural landmarks such as The Royal Library and The Blue Planet aquarium in Copenhagen, the Equinor office building and the Munchmuseet in Oslo and La Villa Mediterranée and MUCEM Marseille.

Oceania Cruises is showcasing 10 'Beyond Blueprints' tours in Europe for 2022, and additional global destinations are expected to be unveiled later in the year. Other featured sites are planned in Barcelona, Belfast, Glasgow, La Coruña, Lisbon and Sete.

Full tour details and pricing will be available at OceaniaCruises.com when the new excursions open for sale at the end of April.