How SES is meeting soaring bandwidth demand as cruising resumes 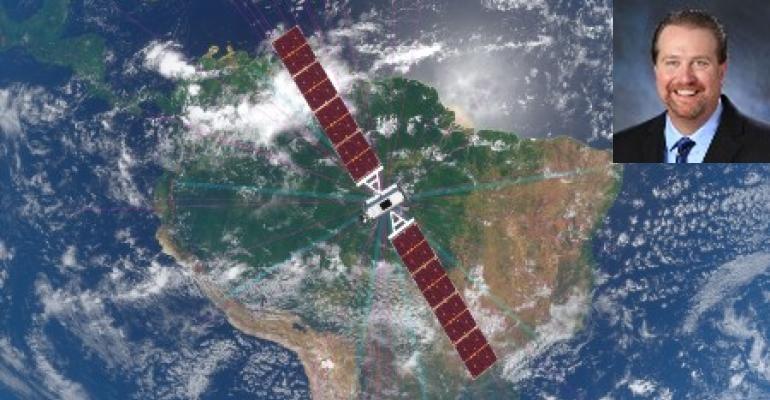 Greg Martin (inset) said O3b mPOWER can deliver up to 2 GBps bandwidth and it is hoped that will be increased
Occupancy may be in the 50% to 70% range as cruises resume but bandwidth demand is way up, as if ships were sailing full.

Demand per person is 25% to 50% higher, and even up to 100% higher on some ships, according to Greg Martin, VP maritime, SES Networks, which provides more than two-thirds of the satellite connectivity bandwidth to cruise operators.

Digital behavior and data use at sea have changed dramatically in the past several years before and during the pandemic. Martin cited many reasons for that.

On the crew side, the on-boarding process is different now. Much more crew training is conducted online, via live meetings or training portals, instead of in person. Digital consumption for entertainment and communication shoots up while crew are isolated in mandatory quarantine after signing on.

Passengers are excited to get out in the world and share their experiences, with many more posting video content than in the past. There is greater sharing via Facebook, Instagram, YouTube and TikTok, which has entered the Top 10 of social platforms on many ships.

'People are not watching long feature films. They're watching shorter things and TikTok is one of the things popping up,' Martin said.

People today expect more access to content and, because of the pandemic, they're more comfortable with platforms like Teams, Zoom, Skype and Facetime and are using these for longer periods.

All this is coupled with cruise lines' data-intensive apps, wearable technology and advanced AI/digital twins. These apps, and wearables that employ RFID technology to detect passengers' location and unlock their stateroom doors, are all on the Wi-Fi network.

Two or three times more smart devices are connected to a ship's network now than a few years ago. Martin said it's not uncommon to have 5,000 devices connected and some ships have 10,000 or even a whopping 20,000 or more, up from maybe a few thousand before.

'All that technology — the enhanced Wi-Fi, the RFID, the tags people are wearing, the push toward contactless embarkation, debarkation, muster drills — lots of tablets and devices are used for that,' Martin noted. 'All those things are based on technology and systems on the ship, and a lot of that comes off the ship into the cloud.

'It's all in an effort to provide the best guest experience, a personalized experience,' he continued. 'On a Princess Medallion ship you can get into your stateroom — it recognizes you. You can get drinks anywhere on the ship; they know your dining preferences.'

Ship infrastructure on the network

Plus, a lot of ship infrastructure is talking over the network — examples are weather updates, engine/fuel consumption optimization, wastewater and HVAC management. All these systems take data off the cloud. More and more, technicians are tuning things remotely. During COVID, with ships off-limits to vendors, systems have been developed to remotely control, tweak and update components.

All of this pushes up bandwidth demand. But, for SES Networks, 'It's a good challenge to have,' Martin said. 'We've made a lot of investments during COVID in our networks, our systems and people ... We didn't scale back. We actually leaned in and made big investments.'

Billions of dollars are going into SES-17, a high throughput, geostationary (GEO) satellite launched in October to provide connectivity services across North and South America and the Caribbean, and the forthcoming O3b mPOWER medium Earth orbit satellite (MEO) constellation.

The first mPOWER MEO satellites are expected to launch in late first quarter 2022 with 'game-changing' service starting later in the year. This means providing bandwidth of tens of megabits to multiple gigabits per second — vastly more than now.

Martin said mPOWER can deliver up to 2 GBps and it is hoped that will be increased.

Customers for mPOWER include four of the top five major cruise companies. Princess Cruises — which partnered with O3b on MedallionNet Wi-Fi, a critical component of MedallionClass Cruising — became the first to sign on in 2020.

Besides the revolutionary increase in bandwidth, mPOWER will offer flexibility because its cloud-based software-defined infrastructure can dynamically allocate capacity.

'We're able to provide much more granular service with mPOWER than before. We can can scale up and scale down based on the demands of the ship, exactly how much bandwidth they need,' Martin explained. For example, demand may change if a ship is chartered or if there's a weather event like a hurricane.

'And we're not stopping there,' Martin said. 'For O3b mPOWER, 11 satellites are being launched over the next two years. ... even more are coming on top of that. We have the ability to take it further as we see demand.'

SES already provides global coverage via its hybrid solution. Its MEO satellites cover plus or minus 50 degrees on the globe, and GEO satellites the rest. 'We have around 70 satellites, 20 in MEO currently and the other 50 in GEO ... Everywhere the cruise lines go we cover with MEO or GEO,' Martin said. 'We're doubling down on MEO with mPOWER.'

According to Martin, SES works best in partnerships with the cruise lines directly.

'We think it's the right approach, versus the traditional commodity-buying approach ... During COVID we've worked with cruise lines the whole period when they weren't making any guest revenue. I think we're long-term partners now because of that.

'We want to be the largest and dominant player in connectivity for cruise ships,' he continued. 'We're on pace to do that ... We're not the only one but we think it makes sense to work directly with the satellite provider and not through a service provider because we have the assets and the capabilities. We own [the satellites].'

Martin — who before joining SES worked at Royal Caribbean for 15 years, the last five as IT director and was one of the people who helped created high-speed VOOM — was asked whether great Wi-Fi is still a brand differentiator, or is it just expected by the market now?

'It's expected by the market that all ships have great service. Not all do, yet,' he said. 'We think the ships we serve have great or close to very great service but that's not consistent across all ships yet. There's a lot of room to go there.'

It also depends on what cruise lines do with that bandwidth. Martin said they need to optimize it for their brand and their guests. He pointed to how Princess, with MedallionNet, 'tailored a solution on top of our service.'