Challenges for cruise lines and ports in getting Fit for 55 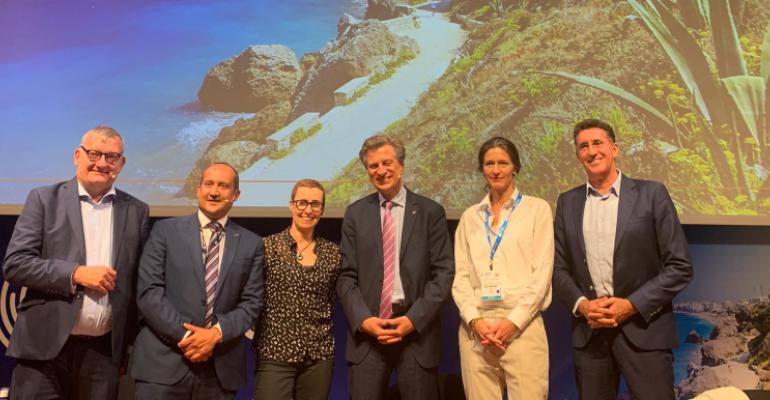 Not being ready to provide shore power or zero-emission technologies will become a factor contributing to loss of competitiveness for some EU ports.

This, coupled with question marks about what alternative fuels to invest in, and challenges related to alternative energy availability in the future, were the underlying takeaways from panelists in a Are you Fit for 55? discussion in partnership with CLIA Europe and facilitated by Luis de Carvalho, CEO at Bermejo Ajamil & Partners Europe during Seatrade Cruise Med.

The pillars of this effort include: carbon offsetting; reduction of GHG component; zero emission at berths - which Griffiths described as ‘most challenging’ - promotion of renewable energy; taxation of fossil fuels; and developing financial support for the green deal. According to CLIA Europe, 7% of cruise berths in Europe can offer shore power or will be getting shore power in the next five years.

Under the Fit for 55 proposals, from January 2030 cruise ships staying for more than two hours in a EU TEN-T* port would have to connect to shore power unless they used another zero-emission technology for all energy needs whilst in port.

Exceptions include it’s an unscheduled call due to safety reasons, unavailable connection points in port because the shore installation at the port is not compatible with the onboard on-shore power equipment and emergency situations.

However from January 1, 2035, the two latter exemptions may not be applied to a given ship, in total, more than five times during one reporting year.

Barbara Scheel Agersnap, CEO of the Copenhagen Malmö Port Authority, questioned what sort of alternative energies should ports put their money behind. ‘Ports are part of a bigger issue surrounding future energy needs. When we offer shore power for ships how can we create more electricity at the same time so we become part of a bigger solution?’ she asked.

Referencing alternative solutions Agersnap said, ‘we are creating a place called Ocean Valley around Denmark and Sweden where we work together to move these obstacles in front of us, both officially and unofficially. We need to get more certainty in the game and test, test, test to get going but all this is at a time when we have an energy crisis in Europe, which makes it interesting, but also challenging.

Heino Nau, the European Commission's Coordinator for International Blue Economy referenced the short term energy crisis caused by the conflict in Ukraine. ‘But with crisis comes opportunity and in Germany we are seeing a visible daily push on the renewable energy mix which I find fascinating.’

Linden Coppell, VP Sustainability and ESG for MSC Cruises, noted, ‘LNG has enabled us to look at different designs of ships, different storage capabilities on board, different bunkering options,’ but she cautioned, ‘concern if the pathway to bio synthetic energy alternative fuels doesn’t come to fruition or they are there but the maritime industry can’t get the tangible amounts it needs.’

Coppell cited parallel requirements and pressures on the airline industry to achieve similar goals. ‘Aviation is saying it needs sustainable alternative liquid hydrocarbon fuel, it’s the same for shipping but we are going to need a huge proportion of that way into the future.’

Coppell called for the right policies and regulatory environment to be put in place that enables shipping to get its fair share, ‘through putting some sort of fuel mandate on the fuel suppliers rather than putting the onus on the end user.’

Coppell asked of the EU Commissioner that any rules and regulations are fair, equitable and stressed that cruise is, 'a unique sector that needs unique solutions'.

Having a LNG-powered cruise ship is enabling MSC Cruises to test fuel cell technology, ‘which you can’t do with traditional fuel but you can with LNG, ' commented Coppell. 'If hydrogen is available you could potentially use that but is clean hydrogen going to be available in ports when the cruise lines need it?

‘The difficulty for cruise lines is we are having to start investing in these technologies without knowing where and what types of green fuel is going to be available at ports.’

Coppell added, ‘maybe in future we will have to look at our itineraries and possibly we will only go to EU ports where alternative fuels are available [for bunkering] and I guess this is incentivising the ports to start looking at these technologies if they are relying on the cruise industry for business.’

In summing up, Nau called for more stakeholders around the table - not just ports and cruise lines – to work towards solutions. ‘We need cooperation and facilitation, with the latter either by local government or by the EU. Noting the EU's principal of subsidiarity, i.e., decision-making at the most local level, this means that clean climate measures by cities and port authorities will oblige cruise lines ‘to leave their comfort zone’ while reaching environmental targets, Nau added.

Need to get going

Stephen Xuereb, COO of Global Ports Holding summarised his views: ‘2030 is around the corner…the targets set are pretty aggressive but we need to get going. We are conscious costs are high but it is eight years away and we need to bring all stakeholders together - the ports can’t do it alone, the cruise lines can’t do it alone, we need to collaborate as this is very challenging.'

de Cavalho closed the fascinating session reiterating: ‘we have to collaborate but we have to get going. Let’s get the right partners around the table and move forward as if we want to have a cleaner planet it is everyone’s responsibility.’

*Requirements for shore power, LNG and alternative fuel supply will most likely only apply to TEN-T Core and Comprehensive ports, not all ports in the EU. The TEN-T regulation is currently under revision, which will also have an impact on the list of TEN-T ports. The legislative process is still ongoing, so the new list is not final yet. See link to current regulation. Also see link to EU Commission proposal for revision.

Are you Fit for 55? panel rounds off double bill opener at Seatrade Cruise Med
Sep 06, 2022