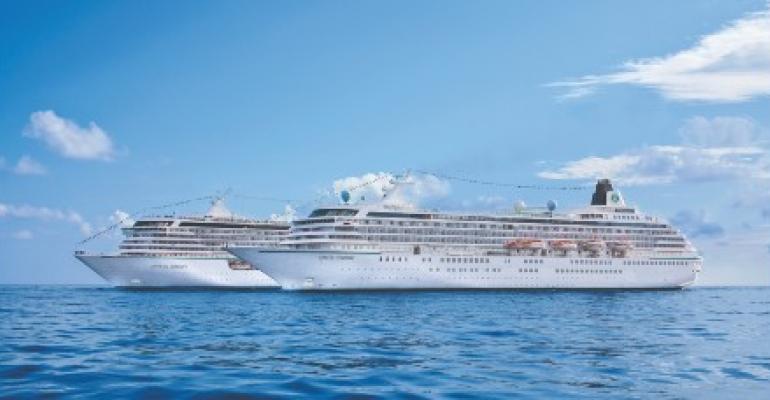 Saturday night update: Crystal Endeavor's issue has been resolved in Ushuaia, according to an official source there, and the ship has departed, en route for Montevideo, Uruguay.

Reports are circulating of the arrests of Crystal Symphony and Crystal Serenity in Freeport, Bahamas, and Crystal Endeavor in Ushuaia, Argentina.

The reports rely on crew sources aboard the ships. Seatrade Cruise News has been unable to obtain an official confirmation from authorities in the Bahamas or Argentina.

A creditor says it's true

However, a creditor with a registered legal claim in the Bahamas said the two ships in Freeport had been seized — though not as a result of his company's action. The creditor did not want to be named for this story.

And an Ushuaia source gave weight to the Crystal Endeavor report by stating it is hoped that ship's situation could be resolved over the weekend.

Separately, a US-based attorney for Peninsula Petroleum Far East, which secured an arrest warrant for Crystal Symphony from a US judge in January over unpaid fuel bills, said he was not able to comment on whether Peninsula is behind the actions in Freeport and Ushuaia.

Crystal Endeavor said to be awaiting OK to leave Ushuaia

Crystal Endeavor docked at Ushuaia Thursday night and disembarked passengers on Friday without incident, and a source said Crystal Cruises had been able to settle a bill there but the ship was being held pending a judge allowing its release.

The matter is in the hands of a federal court in Ushuaia and Argentina's Maritime Authority, and a local source said efforts were under way to get Crystal Endeavor released before Monday.

In a statement, Crystal Cruises said it is unable to comment on 'pending legal matters at this time,' noting that the three ships' voyages were ended and no passengers are on board.

The statement also asserted the officers and crew are being 'well cared for,' adding: 'Crew members have been paid per their normal schedules and we are meeting and exceeding all contractual obligations.'

After Peninsula Petroleum secured the warrant for Crystal Symphony Jan. 21 in the US, the ship had subsequently diverted to Bimini to avoid arrest in Miami. Passengers were disembarked and transported by ferry to Port Everglades. This week Crystal Symphony was joined there by Crystal Serenity, which also disembarked its passengers who went by ferry back to Florida.

A couple days ago, both vessels left for international waters then returned to the Bahamas and anchored off Freeport where they were reportedly served Friday night.