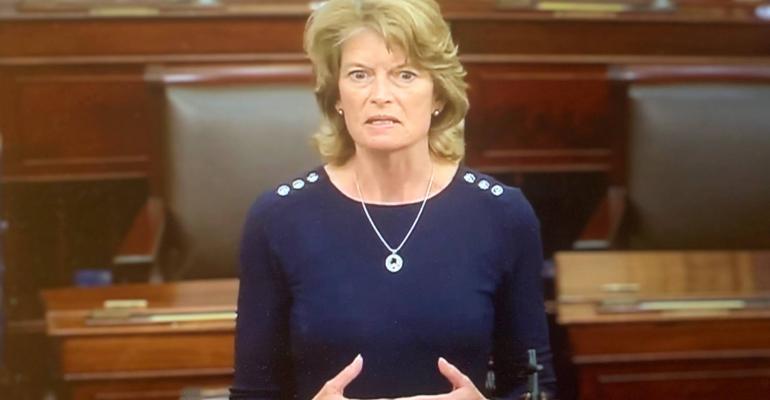 Sen. Lisa Murkowski thanked her Senate colleagues for 'recognizing the urgency of this situation for Alaskans. Our hope is that the House will now promptly follow suit'

The US Senate on Thursday passed a bill that would give foreign-flag cruise ships a temporary cabotage waiver, enabling them to operate in Alaska without a foreign stop.

S. 593, the Alaska Tourism Restoration Act, waives the Passenger Vessel Services Act for as long as Canada's cruise ban is in place (currently, through February 2022). This would allow foreign-flag ships to transport passengers between Washington state and Alaska.

Swift action urged in the House

Sponsors Lisa Murkowski and Dan Sullivan, both Republicans from Alaska, spoke on the Senate floor after the legislation passed to urge the House of Representatives to swiftly approve the bill. Rep. Don Young, a Republican from Alaska, introduced companion legislation in the House.

'The Alaska delegation has been working every angle to help find a path forward for struggling Alaskans who rely on the tourism industry. Senate passage of my legislation sends a strong signal that we will not stand idly by, withering on the vine, until another country catches up to our level of readiness,' Murkowski said. 'This shows that the health and restoration of our economy cannot be held up by Canada, especially since Alaska has led with vaccinations in the country and our communities are ready to welcome visitors back.'

The bill passed by unanimous consent.

Murkowski thanked her Senate colleagues for 'recognizing the urgency of this situation for Alaskans. Our hope is that the House will now promptly follow suit.'

The legislation would have to clear the House and be signed into law by President Joe Biden.

In recent days, cruise operators have stated they need clarity in the next few weeks in order to salvage at least part of the Alaska season. They still have to get through the Centers for Disease Control and Prevention's conditional sailing order, and have estimated it takes 60 to 90 days to start up a ship.

Major lines have kept at least one vessel standing by on the US West Coast as they hold out hope.