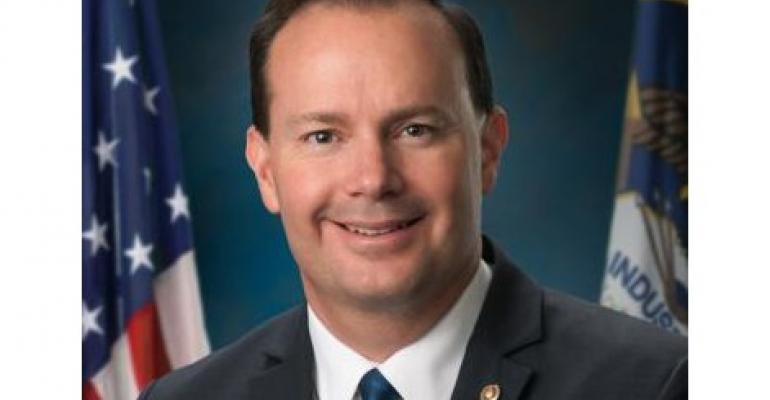 Sen. Mike Lee, a Utah Republican, called the PVSA an 'arcane law benefits Canada, Mexico and other countries who receive increased maritime traffic, at the expense of American workers in our coastal cities'

With Congress passing a temporary waiver to the Passenger Vessel Services Act to allow foreign-flag cruise ships to sail in Alaska this summer, US cabotage regulations are back in the spotlight, leading to three proposals that would repeal and 'reform' the PVSA.

Sen. Mike Lee, a Utah Republican who introduced the bills, considers the PVSA an outdated, protectionist law that harms American jobs and tourism.

'The PVSA is bad news,' Lee said. 'This arcane law benefits Canada, Mexico and other countries who receive increased maritime traffic, at the expense of American workers in our coastal cities, towns and ports. Reducing demand for jobs and travel opportunities here in the US is the opposite of "America First." And in the context of ocean liners, this protectionist law is literally protecting no one, as there hasn’t been a cruise ship built domestically in over half a century. The PVSA is bad economics and bad law, and it’s far past time that Congress reconsider it.'

But small cruise ships are being built in US

Contrary to Lee's assertion, cruise ships are being built in the US — just ask American Cruise Lines, American Queen Steamboat Co. and Lindblad Expeditions — whose fleets include newly built river and coastal vessels from several US yards. Or Viking, which is expanding into the US rivers.

The PVSA requires that ships transporting passengers between two or more US ports — a domestic voyage — be American built, owned, flagged and crewed. 'Due to these rigid and expensive requirements, many ship operators choose to domicile and conduct business elsewhere,' Lee said. To carry passengers coastwise, non-US ships must call at a foreign port. The choices are typically Ensenada, Mexico, for Hawaii trips; and Vancouver or Victoria, BC, for Alaska, to name a few examples.

In Lee's view, 'While Canada serves as a primary beneficiary of the law, which diverts commercial activity to its ports, the perverse incentives created by the PVSA also mean Canada controls northwestern American cruise seasons. During the pandemic, Canada has closed its ports to foreign ships. Cruises cannot sail without this required foreign stop and this move could crush the Washington and Alaska tourism economy.'

When this pandemic crisis arose, it rekindled the longstanding debate about PVSA.

The waiver applies specifically to Alaska and only for as long as Canada bans cruise calls — currently, through February 2022.

His 'Protecting Jobs in American Ports Act' would repeal the 'US-built' requirement for passenger vessels operating between US ports, 'thereby incentivizing American companies to develop voyages that increase traffic and economic activity — and opportunities for port workers — in American coastal cities and towns.'

But many previous attempts to chip away at US cabotage have failed against strong opposition from US labor and for defense security reasons.

While the cruise industry has sought to avoid the issue as much as possible, the US ports have long been advocates of easing restrictions on foreign-flag vessels, noted Michael Crye, a cruise industry legal and regulatory expert who previously served as EVP of Cruise Lines International Association. The law has been restrictive on the growth of a number of US ports such as San Francisco; Portland, Oregon; Norfolk, Virginia; and Philadelphia.

'There is little argument that labor and construction costs are less in many foreign construction yards than in the United States,' Crye said. 'Labor costs for US crew are generally some of the highest in the world.

US labor and defense capability

'However, US labor unions and owners/operators of US ships in the coastwise trade argue that having the Jones Act and PVSA in place ensures that the United States maintains the capability to build large ships both passenger and cargo and therefore significantly enhance the defense capability of the US,' Crye continued. 'The US actually has a maritime security program where merchant ships are given a subsidy to continue to make their ships available for defense purposes.

'There is some validity to the economic arguments as well as the defense arguments,' he said, and noted 'there is a burgeoning US-flag industry that largely consists of smaller ships in the coastwise trade. These have been built in smaller US yards and fully meet all the PVSA restrictions.'