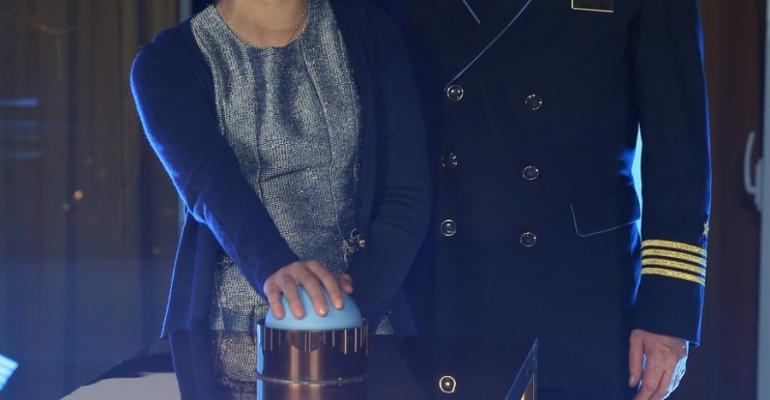 1.6m Hafengeburtstag spectators were able to follow the event streamed live, AIDA Cruises said. Additionally, the ceremony was broadcast by the public NDR TV station throughout the North of Germany.

AIDAprima's godmother was 13-year-old Emma Schweiger, a young actress particularly popular in Germany. The Los Angeles-born daughter of actor, Til Schweiger, and his wife Dana has been a child actress in various roles on TV and in films. She has also performed as a co-moderator on German TV.

To celebrate the christening of its new ship, AIDA staged special sail-away parades at Palma de Mallorca and Kiel, where two AIDA ships were berthed on Saturday. Majorca's capital port saw AIDAcara and AIDAstella departing together at 22:00, at the same time AIDAluna and AIDAvita set sail from Kiel.

In Hamburg, the christening ceremony closed with a light and music performance as well as fireworks displayed above the port.

A few hours prior to the naming, AIDAprima completed a successful test run of its dual fuel engine. Permission for LNG bunkering was granted by Hamburg's authorities last Wednesday. The test run went smoothly without any complications, AIDA reported.

The dual fuel engine allows AIDAprima to operate exclusively on eco-friendly LNG while berthed in port – a big step forward even in comparison to 0.1 percent sulphur Marine Diesel Oil, as the operator points out. According to AIDA, SOX and particle emissions are completely eliminated, while CO2-emissions are cut by 20% and NOX-emissions by 80%.

In addition, AIDA Cruises says it has approvals for LNG-operation at Southampton, Le Havre and Zeebrugge, while preparations and the approval procedure is underway at Rotterdam.