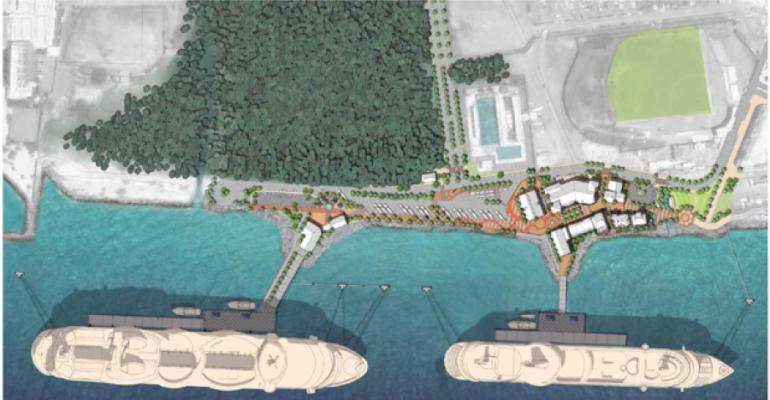 The second mega-pier, at left, would handle the world's largest cruise ships

Curaçao, where passenger numbers have ballooned to 600,000 from 450,000 in 2012, needs another big-ship dock to reach 1m cruisers in five to 10 years. That's why the government has approved a second mega-pier, estimated at $50m counting landside and soft costs.

It will be located at Willemstad's Otrobanda beside the first mega-ship pier and is targeted to open in late 2016/early 2017.

Stanley Palm, minister of economic development and tourism, led a delegation to the Florida-Caribbean Cruise Association Conference & Trade Show in St. Maarten this month where he and Curaçao Ports Authority officials met with cruise line executives. The project also has been presented to the FCCA Operations Committee as well as individual lines.

Besides a terminal and deep-water pier that would handle the world's largest cruise ships, the Rif Seaport would extend the existing cruise village with new plazas, music performance areas, some high-end retail and restaurants to draw residents and stay-over tourists, too. The architectural style will be Dutch colonial/Caribbean.

'It's a city development project,' CPA managing director Humberto de Castro said. Cruise passengers come to Curaçao to experience the island, he added, so a pleasant welcome and good connectivity between the pier and other areas are vital.

The pier, estimated at $30m, is costly because of its deep-water location. An additional $10m will go to the landside area, which is currently undeveloped, with an additional $10m in soft costs.

The master plan was created by Scott Lagueux, partner and senior planner at LandDesign, along with teammates Ballast Nedam and Hill International. Geotechnical testing to determine the exact position for the pilings is just beginning, and the aim is to begin construction in early 2015, according to CPA chief commercial officer Raul Manotas. CPA is in active communications with cruise operators and getting valued feedback on the plans, he added.

Even though Curaçao is too far south to reach on seven-day cruises round-trip from South Florida, it's growing because 'It's a quality destination,' according to Kevin Sheehan, ceo of Norwegian Cruise Line Holdings. 'It costs more but it's a great destination,' he told Seatrade Insider, adding that lines would like incentives to offset costs.

Florida-based ships include Curaçao on eight-or nine-day round-trips, while vessels sailing from San Juan and the Dominican Republic have it in seven-day cruises. Manotas said CPA is working with operators to develop further itineraries.

In addition to the mega-pier project, CPA is considering developments to enhance other areas of Willemstad's waterfront.

'We have a lot of property in the downtown area that has been left [idle] for 20 years. Now we want to develop it,' de Castro said, adding that CPA will 'safeguard what is so authentic for Curaçao, our downtown.' Willemstad's historic center is a UNESCO World Heritage Site.

Any development will involve a transparent process with all stakeholders and will enhance the destination for cruise visitors and stay-over tourists alike, de Castro said.