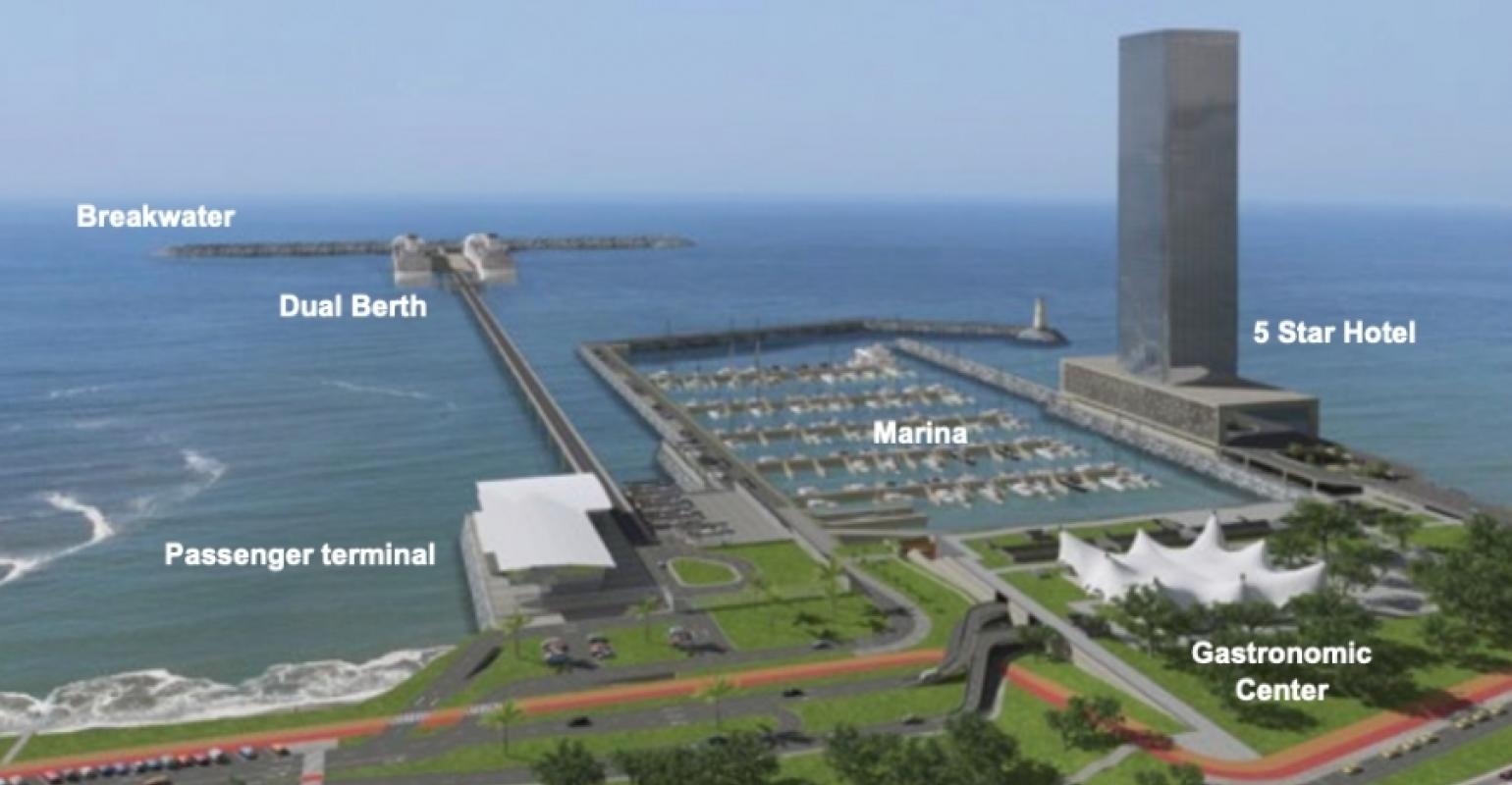 The Terminal de Cruceros Bahía de Miraflores (BM) will be situated on reclaimed land adjacent to Miraflores, one of Lima's toniest districts. It will provide transit and turnaround functions. Targeted completion is first or second quarter 2021.

Cruise ships currently dock at the cargo port in Callao, 14 kilometers/eight miles' drive away. After the port was privatized in 2010, cruise ships lost priority to cargo operations and lines have sought alternatives, according to Jorge Contreras Rivas, longtime ship's agent, former director of the Association of Peruvian Maritime Agents and now BM commercial director.

Developer and BM president Ignacio Larco Pedraza thinks the cruise facility will create many benefits for both visitors and Peruvians, not only in Lima but by facilitating access to great heritage sites of pre-Hispanic civilizations in the north and south of the country that can be reached by ground or air.

'The whole Pacific coast of South America is so unexplored,' noted seasoned port infrastructure expert Phi Crannell, president of Florida-based Ports & Maritime Group International and principal consultant for the Miraflores project. In fact, it accounts for just a 1% sliver of the global cruise business, with ships operating seasonally between November and April. That is expected to change, however, due to a number of developments.

Panama City's new Amador cruise homeport is set to open later this year, and the presidents of Panama and Chile have inked an agreement to develop and promote a new Pacific route. Manta, Ecuador, inaugurated its new cruise terminal in late 2018. And both Chile and Peru have recently approved cabotage for foreign-flag cruise ships, opening the possibility of crafting shorter itineraries and, perhaps, domestic source markets (as happened in Brazil on the Atlantic coast).

The Miraflores berths would be able to simultaneously accommodate a pair of 344-meter/1,130-foot ships (the size of Carnival Cruise Line's 180,000gt 'XL' class). They would be located at the seaward end of a 1,300-meter/4,265-foot trestle. This distance from shore is to ensure no impact to the popular surfing beach at Miraflores, and the pier will sit on tall piles to minimize the impact to aquatic life. A breakwater just beyond the berths is designed to deflect the 1.5-meter/five-foot swells in Miraflores Bay.

Dual FMT gangways will serve each berth. The terminal will be of an iconic design, with a retractable roof. Full services including electricity, potable water and, perhaps, LNG bunkering are planned.

A 250-slip yacht marina, high-rise five-star hotel and a food-court-like gastronomic center are other components.

Contreras projects 25 to 30 cruise calls during 2021, ramping up to potentially 200 calls and about 400,000 passengers annually going forward.

'We are always interested in any new port developments, and a dedicated cruise port would be welcome,' said Simon Douwes, senior director, deployment and itinerary planning, Holland America Line. HAL operates just a handful of partial turns in Callao, and so Douwes envisions the Miraflores port for transit calls, not as a homeport for his line.

'Peru is an up and coming destination and a logical place to turn our ships around when going from Florida to Chile and Argentina,' said Mike Pawlus, director of strategic itinerary & destination planning, Azamara Club Cruises. The line just completed its first turnaround in Callao on Dec. 1 with Azamara Pursuit and another is planned for March 23, 2020.

'Peru has a lot to offer and is an attractive place for travelers. People want to see the Nazca lines, which we do from Pisco, and Chan Chan from Salaverry makes for a quality shore excursion,' Pawlus said.

From a turnaround standpoint, Lima's airport provides many nonstop flights from key cities in the US, he added.

'Overall, I applaud this news from Peru,' Pawlus said, 'and I would expect their cruise counts to continue to increase in the years ahead.'

Contreras said the development has the blessing of the newly elected mayors of Lima and Miraflores, as well as national Vice President and Congresswoman Mercedes Aráoz Fernández.

The facility would put cruisers directly into one of the best parts of Lima. Miraflores is an affluent residential neighborhood with some of the city's finest restaurants and hotels. Building the facility on reclaimed land will facilitate public access to the Miraflores beach, currently hard to reach beneath a 13-meter/43-foot cliff. The terminal could be used for community events and conferences when ships are not in port, and the park and gastronomic center will be open to the public.

Ignacio Larco Pedraza, who has mining and real estate interests, runs the swanky Lima Marina Club. Together with Contreras, he twice visited Seatrade Cruise Global and got fired up about cruising's growth potential.

'He's a developer who would do things right and respect the social and safety commitments,' Crannell said.

Extensive geotechnical, oceanographic and environmental studies are being carried out to ensure minimal impact and safety. The (US) Maritime Institute of Technology and Graduate Studies (MITAGS) has been engaged to test navigational conditions. In six weeks, captains from Carnival Corp. (Princess Cruises or Holland America Line) and from Royal Caribbean are scheduled to participate in simulator studies at the MITAGS facility near Baltimore, along with two pilots from Callao.

A new restricted-access airport approach from Lima was completed last October. This will connect with the Costa Verde highway, running past the Miraflores facility, which will speed access to Jorge Chávez International Airport to under half an hour, Contreras said.

According to Crannell, the new port's tariff will encourage ships to stay overnight. 'Machu Picchu is on everyone's list. This is the high-end segment of the cruise market and those people are really interested in the high-end tours. This is an opportunity to make longer tours,' he said.

Machu Picchu is certainly a draw, but Lima itself has 'so much to offer' and is a 'great destination' with 'wonderful food,' said Mark Conroy, managing director, the Americas, Silversea Cruises. Silversea currently operates content-rich 14- to 16-night Panama Canal cruises that go down the Pacific coast to Callao, and 18- to 24-day Callao-Buenos Aires cruises are 'amazing,' he said.

The impressive historic center of Lima, once Spain's most important city in South America, is designated a UNESCO World Heritage Site, and other attractions include Museo Larco, bursting with treasures of ancient Peru; Huaca Pucllana, an archaeological site with a great adobe pyramid; and the fine restaurants and shops of Miraflores and San Isidro.

Some of Peru's many other highlights include Cuzco, gateway to Machu Picchu and a UNESCO World Heritage Site, along with the pre-Hispanic Chimú kingdom's capital, Chan Chan, the Nazca lines and the historic center of Arequipa. Plus, there are the natural marvels of the Paracas Peninsula and more recent archaeological discoveries like the Royal Tombs of Sipán.

2021 is the bicentennial of Peru's independence, and the government is planning an iconic development to celebrate that. The new Pachacamac Museum is scheduled to open in Lima, near the Miraflores cruise development. Plus, the port facility itself is expected to become operational, so iconic public and private projects will mark the bicentenntial festivities.

Contreras summed up the port development as 'from vision to reality.' And, citing the cruise advances in Chile, Ecuador and Panama as well, he said: 'Our leaders are presenting a new vision for the region.'