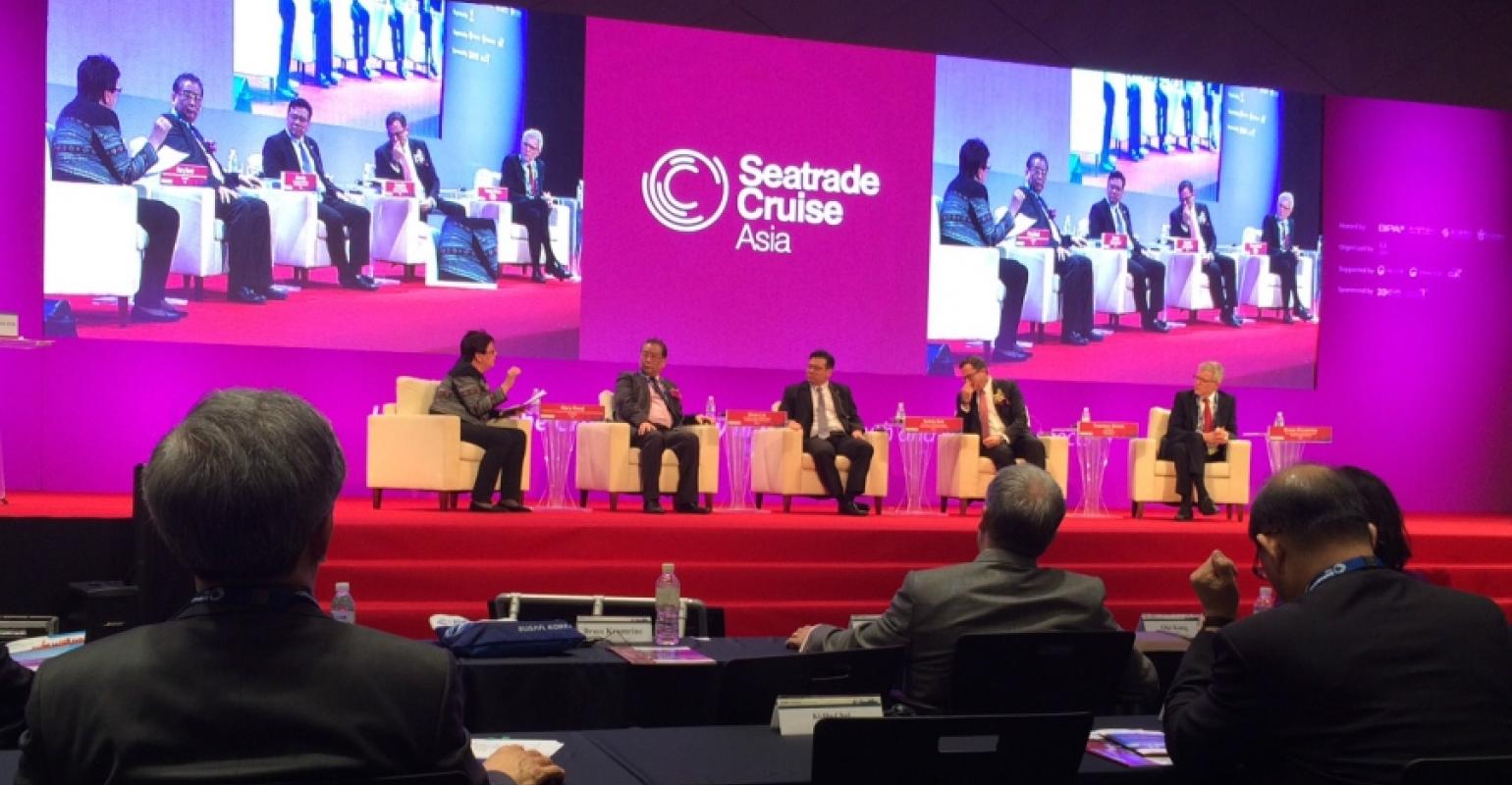 In introducing the session, Mary Bond, managing director of publishing and editor, Seatrade Cruise Review and Seatrade Cruise News pointed out that an unprecedented nine newbuilds are specifically destined to come into the Asia/Australasia cruise market by 2020.

He said Asia is the world's fifth largest market accounting for 9.2% of international cruise ship deployment, measured by available lower berths. (First is Caribbean with some 33.7%). He was drawing from the findings of CLIA.

Five years ago cruise travel was almost unheard of in Asia. Today the region is the fastest growing in the global cruise market with 2,080,998 Asian passengers registered in 2015, compared to 1,685,455 in 2014 – representing a 23.5% year-on-year increase. Contextualizing this, Dr Liu said the global demand for cruising has increased 68% in the last ten years.

Dr Liu said full multiplier impact of the economic impact of cruising in countries across the region, will not be felt until stakeholders' commitment and contribution is realised. ‘Asia is not an easy-win market’, he reiterated. Drawing from his experience in China he said the issues were not to do with any lack of demand but rather pricing, distribution and such.

Buhdy Bok, president, Costa Group Asia, Costa Cruises Asia Pacific & China, said quality and price were also major considerations. Elaborating on how lack of port infrastructure impedes growth, he said itineraries were not being maximized because of congestion through the entire value chain. This could be seen right from the cruise ports where passengers arrived, right through to the destination spots where passengers headed out to.

Bruce Krumrine, vp, shore operations, Holland America Group agreed that there it is timely that these downstream issues are being brought up at the conference. There was a need to increase guest opportunities and build variety. ‘Make Busan a gateway to passengers experiencing Korea’, he urged. He said the challenge is to meet passengers’ expectations and the experience they are looking for.

Thatcher Brown, president, Dream Cruises of the Genting Group, said what is also critical is  ‘people development’ and to develop the industry from a talent perspective, in order to deliver an alternative vacation experience. He said education and managing market mix, to deliver a good cruise experience, were also important.

Dr Liu gave some insights which showed that while Chinese passengers in particular had very high levels of satisfaction with their cruise experience, they found that some of the shore excursions experiences lacked variety.

Some passengers, for instance, had found that itineraries were too shopping-focused. He suggested that giving passengers more complete information on cruise itineraries, might help alleviate such issues.

Turning to capacity, Dr Liu said he does not see excess capacity. Royal Caribbean International currently has five ships, in China. He advised that players need to be well-prepared, have the right strategy, and invest in effective distribution in the right markets.

Brown added that Genting's investment in four newbuilds(two for Dream and two for Star) for the region, is a statement of confidence in the market place. He said it is building up its cruise portfolio in the region and believe there is room in the market which has a burgeoning middle class.

He said Genting's capacity is currently deployed out of Guanghzhou and Xiamen in China, Singapore and Keelung. He added that the newbuilds being customized to the local market will further induce demand.

Bok said Costa, which has two newbuilds in the pipeline for its Asia brand, is now doing more partial turnarounds out of Korea. China has been a great source market and there can be other source markets such as Korea and Japan developed, to reduce over-reliance on China market, he explained.

Dr Liu said although Korea certainly has potential, it is currently not a major source market for RCI, as it face challenges in facilitation. Brown said Korea has much to offer and foresees a growth in its popularity both as a destination and a hub. Krumrine agreed there is potential to grow homeporting in Korea and will evolve over time.

In a lively discussion on customization for the Asia market, Dr Liu predicted that Asia will see a spectrum of cruise products, as cruise lines position themselves to serve the market. He said in keeping with market demand, there will probably be a balance between recognizable international and customized ‘local’ offerings.

Brown made the point that even within the China market for instance, there are differences. Understanding differences is crucial in catering to the Asia market. Krumrine was upbeat about the advantages of having diverse offerings. He shared that introducing more Japanese-orientated refurbishments and cuisine on board vessels has also appealed to HAL Group’s international guests.