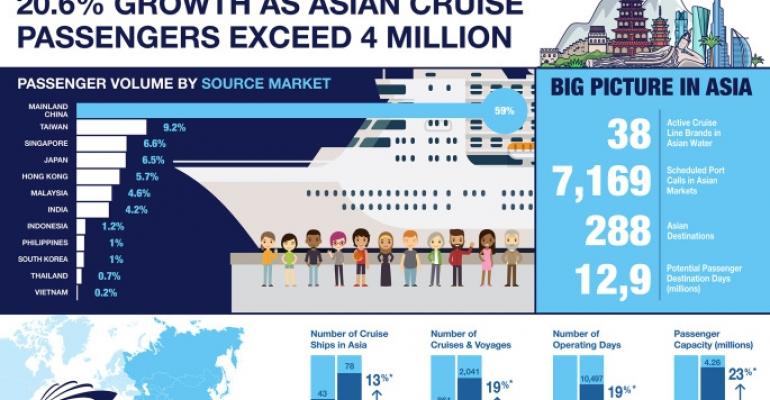 These findings are from the just-released 2018 edition of 'Asia Cruise Trends,' commissioned and prepared by Cruise Lines International Association, in collaboration with CHART Management Consultants.

What caused the China slowdown

The study attributed the slowdown in China source market growth to 'a mix of regulatory issues and some reductions in ship deployment in East Asia as the demand for those ships was strong elsewhere in the world.'

Asia accounted for about 15% of the total global ocean passenger volume in 2017.

Most of the Asian source markets registered double-digit year-on-year growth. Between 2012 and 2017, the Asian cruise passenger count grew from 775,000 to nearly 4.052m, almost a 40% compound annual growth rate.

Asians continue to prefer shorter cruises within Asia. Some 91% sailed within the region, with shorter cruises of four to six nights by far the most popular. Of those who sailed outside Asia, Europe was the leading long-haul destination, with 25% traveling to the Western Mediterranean, 9% to the Eastern Mediterranean and 8% to the Baltic. The Caribbean drew 24% and Alaska 11%.

Thirty-eight cruise brands will be deployed in Asia, compared to 35 last year, and 78 ships, compared to 66. Sixteen of those are year-round vessels.

There will be 1,922 Asia to Asia cruises, down from 1,992 last year. A further 119 voyages beginning or ending outside of Asia will pass through the region. In total this is a 2.2% decrease in sailings from 2017.

Passenger capacity is estimated at more than 4.26m, up 1% from last year.

Some 12.9m passenger destination days are planned in the region, 4% fewer than last year. Some 7,169 port calls at 288 destinations are scheduled. East Asia accounts for 60% of the port calls, followed by Southeast Asia (36%) and South Asia (4%).

Japan, mainland China and Thailand are the leading destinations, with port calls numbering 2,601, 1,012 and 581 respectively.