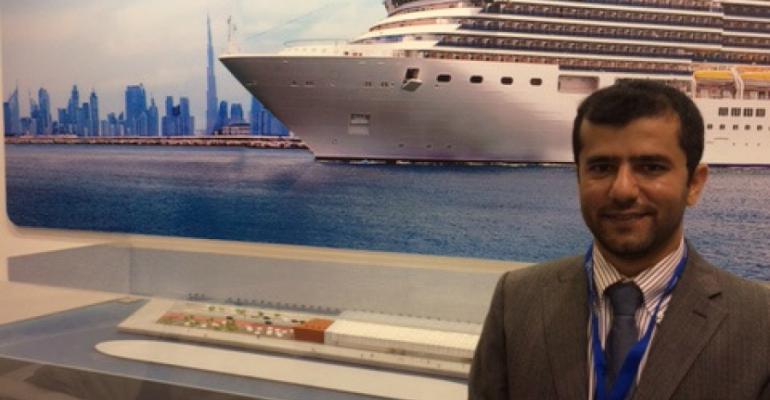 The model is being showcased by Abu Dhabi Ports Company following an international design competition and extensive industry stakeholder input.  An important element of the competition was the commitment to hire two leading Emirati architectural graduates, to join the project team for the development of the architectural design.

The Abu Dhabi contingent have been meeting with cruise operators to press the emirate’s case as an alternative and preferred winter cruising destination.

On the ADPC and TCA Abu Dhabi stand is a scale model and a video ‘fly-through’ which shows the facilities and style of the new building. Ground clearance for construction of the terminal is underway.

The 8,000 sq mtr terminal building will use the footprint of an existing warehouse, but apart from the foundation will be completely new, Al Shamisi told Seatrade Insider. It will be operational in 2016, he added.

Al Shamisi commented, ‘our new terminal plans are already attracting a lot of attention, demonstrating how very serious we are about developing this important market for the emirate.’

‘The new visa fee makes it much more affordable for operators to promote Arabian itineraries, of which Abu Dhabi is a key stopover,’ said Sultan Al Dhaheri.

Abu Dhabi is now working with Dubai and Oman in a ‘Cruise Arabia’ alliance to build the region’s international cruise appeal.

Zayed Port cruise passenger terminal is located close to the centre of the city and its exciting attractions, from the Louvre Abu Dhabi which will open in 2015 to Ferrari World Abu Dhabi, the Sheikh Zayed Grand Mosque and Yas Waterworld to mention just a few.

The 2013/2014 cruise season which ran from November to April, was the busiest yet for Abu Dhabi, with a record 10 maiden calls (first-time visits) and 189,709 passengers visiting the UAE capital on 75 calls into Zayed Port during the season.