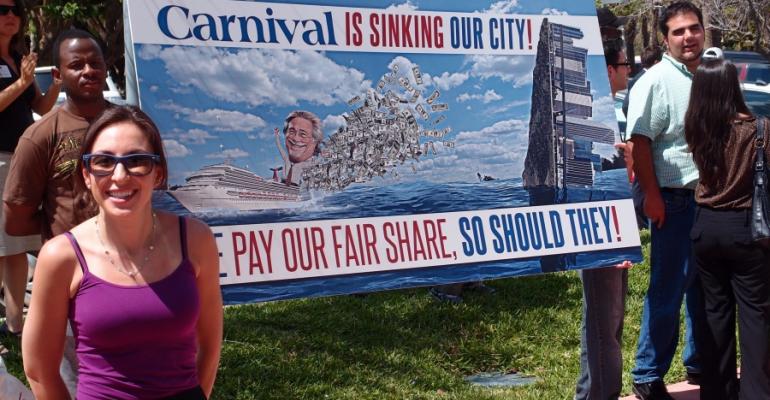 ‘I call on Micky Arison to pay your fair share of taxes. Why is Carnival refusing to pay its fair share of taxes and manipulating the system and not helping children?’ the first of about a dozen activists said in a question and answer session that hammered away on taxation, social responsibility and jobs.

‘We pay $400m in taxes and fees around the world,’ said Carnival chairman and ceo Micky Arison, who cited a number of ways the company supports children in Florida, including through Camillus House and the Overtown Youth Center.

He added: ‘I’m so insulted by your question that I can’t answer.’

But Arison went on to challenge the facts put out by the 1Miami movement. ‘Your organization said 99% of our revenues are in the US and we pay no tax. Half our revenues are not [generated] in the US. The [cruise] industry chooses to base in South Florida and hires thousands of people. We could be anywhere.’

He said it would be ‘a crying shame’ for Miami to lose thousands of jobs and millions of dollars in tax revenues if the cruise lines left.

Several people who said they were recent graduates asked about moral responsibility and why Carnival doesn’t provide more jobs and money to state coffers to support public universities.

‘Yes, we feel a moral responsibility to the community,’ Arison said, listing contributions to support Florida International University and the University of Miami Medical School, an FIU internship program with Carnival and the fact that board director Modesto Maidique is a former FIU president. ‘We are a global company, with operations in 300 locations and we have to participate in each community,’ the Carnival chief added.

The protesters repeatedly pressed about the company paying only a 1% tax rate, a figure Arison rejected as incorrect. ‘Regardless of how many times I say we paid $400m, you’re going to ignore that?’ he asked one questioner.

An increasingly irate woman demanded to know much tax Carnival pays to Miami’s Jackson Memorial Hospital, shouting ‘Pay your fair taxes!’ over and over as Carnival director Bob Dickinson, a Jackson volunteer, said the hospital is funded largely through real estate taxes, not corporate taxes. He said Carnival as one of the area’s largest employers provides jobs to people who pay real estate taxes and the company also pays taxes on its properties.

Grabbing the microphone, the woman yelled that her question wasn’t being answered. Finally, security men took back the mic.

‘How insulting your rant has been,’ Arison told the woman, noting that children at Jackson are treated in the Carnival Cares for Kids unit.

Other questioners asked why cruise ships aren’t built or registered in the US, with Arison recapping Norwegian Cruise Line’s Project America initiative, which he said bankrupted a US shipyard, leaving a hull to be towed to Germany for completion and requiring congressional legislation to allow that newbuild to be flagged to the US. At one point NCL had three US-flag ships. Now it has one.

‘Why are you here?’ a woman shouted.

‘We are here because we want to be here. We hire thousands of people. I live here,’ Arison answered. When he asked the protesters: ‘So you want to drive us to China, like everyone else has been driven to China?’ about 40 members of the audience began chanting ‘Pay your fair share!’ as they marched out of the room to hold a short demonstration in front of the W Hotel on South Beach.

After they left, Arison told the remaining shareholders the protesters belong to a local branch of the Occupy Wall Street movement. He didn’t mention that these types of scenes are playing out at corporate meetings across a number of industries.

‘It doesn’t matter what I said,’ Arison added. ‘I respect their beliefs. I think they’re wrong. I believe what they’re doing is detrimental to the country.’

A Carnival spokeswoman told Seatrade Insider the company had expected a protest, which was promoted at the 1Miami website. However, Carnival had not been aware several dozen activists bought shares to be able to attend the meeting.

The protesters comprised about a quarter to a third of those present at the meeting attended by most of Carnival’s directors and operating company chiefs from around the world, including Costa Crociere chairman and ceo Pier Luigi Foschi and Costa president Gianni Onorato.

The meeting opened with Arison stating the past three months had been ‘the most difficult and challenging in our company’s history.’ He expressed sympathy to the families who lost loved ones on Costa Concordia and gratitude to the crew, Italian authorities and the people of Giglio. He also thanked Foschi and his management team.

‘We will learn all we can from this accident,’ Arison said.

Vice chairman and coo Howard Frank detailed safety practices and the operational safety review Carnival and the industry are undertaking and recapped the Concordia incident’s impact on bookings and yields.

There were only a couple questions from shareholders about the deadly capsize, with most of the question and answer session consumed by the social justice and taxation issues.

In a statement addressing taxation, Carnival said the majority of its income is earned outside the US. ‘At the international level, there is recognition that it is impossible to develop a tax system by which the income of a shipping company is fairly apportioned and countries typically impose head taxes and other types of taxes in lieu of income taxes.’

The statement continued: ‘Virtually all jurisdictions where our ships call impose taxes and/or fees based on guest counts, ship tonnage, ship capacity or some other measure. These taxes are included in our cost of operations.’