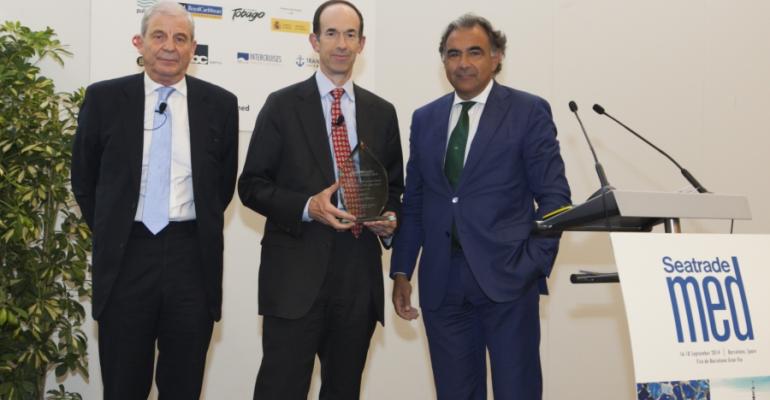 Adam Goldstein, president and COO, Royal Caribbean Cruises Ltd, was announced as the Seatrade Mediterranean Personality of the Year 2014, a biennial award sponsored by V.Ships Leisure and selected by Seatrade and V.Ships Leisure from nominations received.

The award was presented to Goldstein during Tuesday’s opening conference session of Seatrade Med 2014 in Barcelona.

In selecting the Royal Caribbean executive for the award, Seatrade chairman Chris Hayman called Goldstein 'one of the first North American executives to identify Europe as a second source market from an industry standpoint and set about tapping into that potential by spearheading deploying of vessels into the region, and in particular the Med, to ignite local demand.'

Hayman went on to say 'successive new and larger ships, aimed primarily for deployment in the Caribbean, subsequently found their way to Med waters bringing with them innovative on-board offerings never seen before in Europe and culminating in the announcement last year that the world’s largest cruise ship was set to homeport in the Med for a short series of cruises this fall, followed by her sister for the entire 2015 summer season, based in this very location.'

Goldstein thanked Seatrade, UBM and V.Ships Leisure for the recognition: 'The success of any enterprise is that it is a team effort. I am thoroughly grateful to be the recipient of the Seatrade Mediterranean Cruise Personality of the Year.'