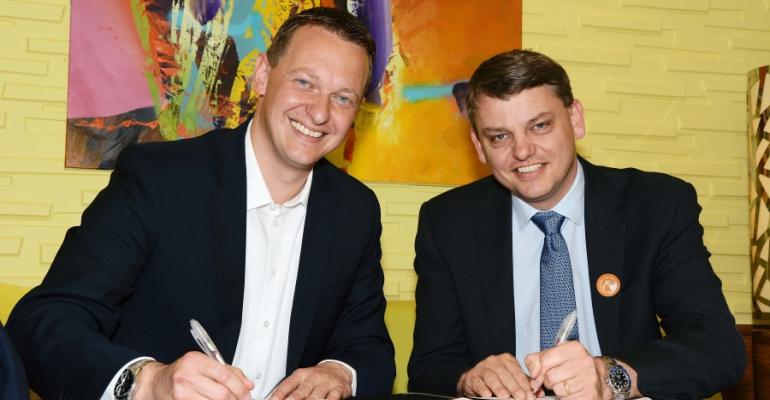 AIDA Cruises has signed a strategic cooperation with Shell as LNG provider for port engine operations of its new flagship, AIDAprima.

The agreement was signed on Tuesday in Rotterdam during AIDAprima's maiden call to the city. As a strategic partner, Shell will become the exclusive provider of LNG in all AIDA Cruises' ports of call. Sistership AIDAperla under cosntruction at MHI will also be supplied with LNG by Shell.

Today, the Japanese-built flagship arrived at its future base port, Hamburg, for the first time. AIDAprima will be christened during the Hafengeburtstag festivities on May 7.

AIDA Cruises' president, Felix Eichhorn, said the operator believed in LNG as the cleanest fossil fuel. 'With the supply of LNG to AIDAprima during her port calls we are sending a clear sign in favour of environmental and climate protection,' Eichhorn commented in Rotterdam.

AIDAprima has been equipped with a dual fuel engine capable to operate with LNG while the ship is docked in port. The required LNG fuel is going to be supplied by truck. The ship's other engines will be shut off in port, leaving the required energy to be generated exclusively from LNG with a reduction of NOX emissions by 80%. CO2 emissions are cut by about a fifth.