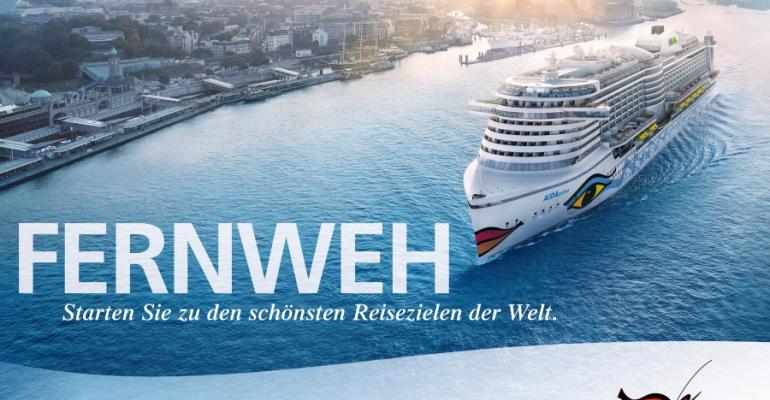 AIDA Cruises will be visting over 180 ports on more than 90 cruises between March 2016 and April 2017. The 276-page program, just published, highlights cruises extending from Norway to the Caribbean and Southeast Asia. New are winter Norway, summer Canaries and year-round cruising from Hamburg.

The 2016 summer program includes the first voyages of AIDAprima. Starting on April 30, the newly delivered ship, built in Japan, will depart from Hamburg weekly on European city itineraries. It is the first ship to be based year-round in Germany.

Passengers departing ex-German cruises in summer 2016 can choose form 23 different routes.In addition to AIDAprima, five more AIDA ships will depart from Hamburg, Kiel, and Warnemünde on cruises to the Baltic Sea, Norwegian fjords, the British Isles, and the Arctic Circle.

New is Norway with Lofoten and North Cape on AIDAvita with calls including Bodø and Haugesund in Norway, and Århus in Denmark.

In August, Fishguard in Wales and Newcastle will feature on Round Britain cruises and Bornholm will be added to Baltic Sea itineraries.

Five AIDA ships are offering 11 cruises in the Med next summer from the Canaries to the Aegean. New ports of call include Nice, Ibiza, Minorca, Propriano in Corsica, and Souda Bay in Crete.

In winter 2016/17 AIDA will visit Northern Norway for the first time on 14-day cruises roundtrip Hamburg. Other winter sunshine sailings include Southeast Asia between December and March, the Canary Islands and the Caribbean. El Hierro in the Canaries, St Thomas in the Caribbean and Mexico's Costa Maya will be maiden calls.

Those who book early can also benefit from AIDA Premium rate including choice of stateroom, preferred booking of excursions and spa appointments prior to the voyage, free seat reservations for flights, two complimentary bottles of mineral water each day on board, and the Internet package with 250 MB per stateroom.