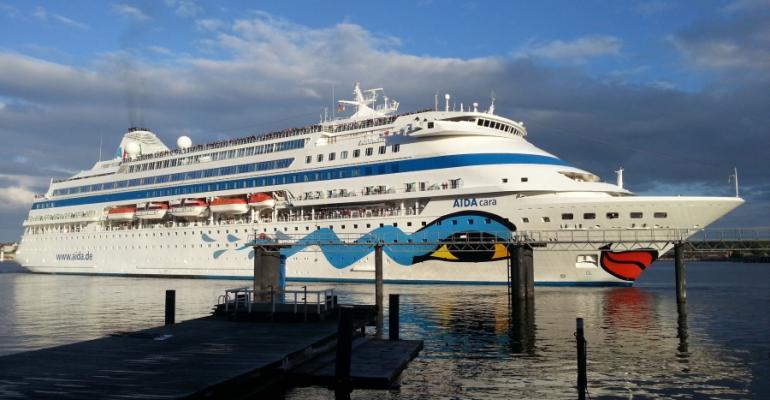 This year’s cruise shipping season in Kiel ended today with a visit by AIDAcara. Overall the port registered 133 calls this year by 25 different ships and 458,771 passengers (29.6% more than in 2014).

Dr Dirk Claus, md of the Port of Kiel (Seehafen Kiel GmbH & Co. KG) said: 'We can look back on a very successful season. Both passenger figures and overall tonnage totals have set new records for Kiel.'

Once again the port has been used as both a start and destination point for Baltic as well as Nordic cruises by all the cruise shipping companies active on the German market. Most frequent visitors were the ships of  AIDA, Costa, MSC and TUI Cruises, which called a total of 90 times.

On no fewer than twelve occasions three, and sometimes four, cruise ships in addition to the regular ferries were in the port at the same time. Most of the cruises began at the Ostseekai Terminal but the new Berth No. 1 in the Ostuferhafen was also used 19 times.

The highlight of the 2015 season was the naming of Mein Schiff 4 in Kiel on June 5 while 12 cruise ships visited this year’s Kieler Woche Regatta, among them Sea Cloud 2 which also took part in the Windjammer Parade.

Of the 35,500 mainly international passengers who visited the Schleswig-Holstein state capital on transit calls most arrived on Holland America’s Eurodam.

The biggest cruise ship visitor was 142,714gt Regal Princess. 'Once again the particular nautical quality of the port has also been in evidence,; Claus commented. 'This summer several big cruise ships changed course and headed for Kiel after storm warnings indicated that other Baltic ports might not be reached with safety.'

AIDAcara departs this evening from the Ostseekai Terminal for the Canary Islands via the Kiel Canal. The ship has more visits to the Kiel Fiord under her belt than any other cruise ship having been a regular visitor to the port since summer 2010. During145 Kiel cruises, more than 350,000 passengers have embarked on or disembarked from the ship.

Next year AIDAcara will be replaced in Kiel by the bigger AIDAvita. The 2016 cruise season will start on  April 25 with the arrival of AIDAluna.

'We estimate that cruise ships will make about 120 calls in the coming year with some 400,000 passengers,' says Claus.  The highlights will be the maiden voyage of Mein Schiff 5 from Kiel and the first visits to the port by Holland America Line’s Zuiderdam and Koningsdam. The port will also welcome a visit by The World lasting several days, as well as the first call by P&O’s Arcadia to the Kieler Woche. The 2016 season will last until October 8, according to bookings received so far.