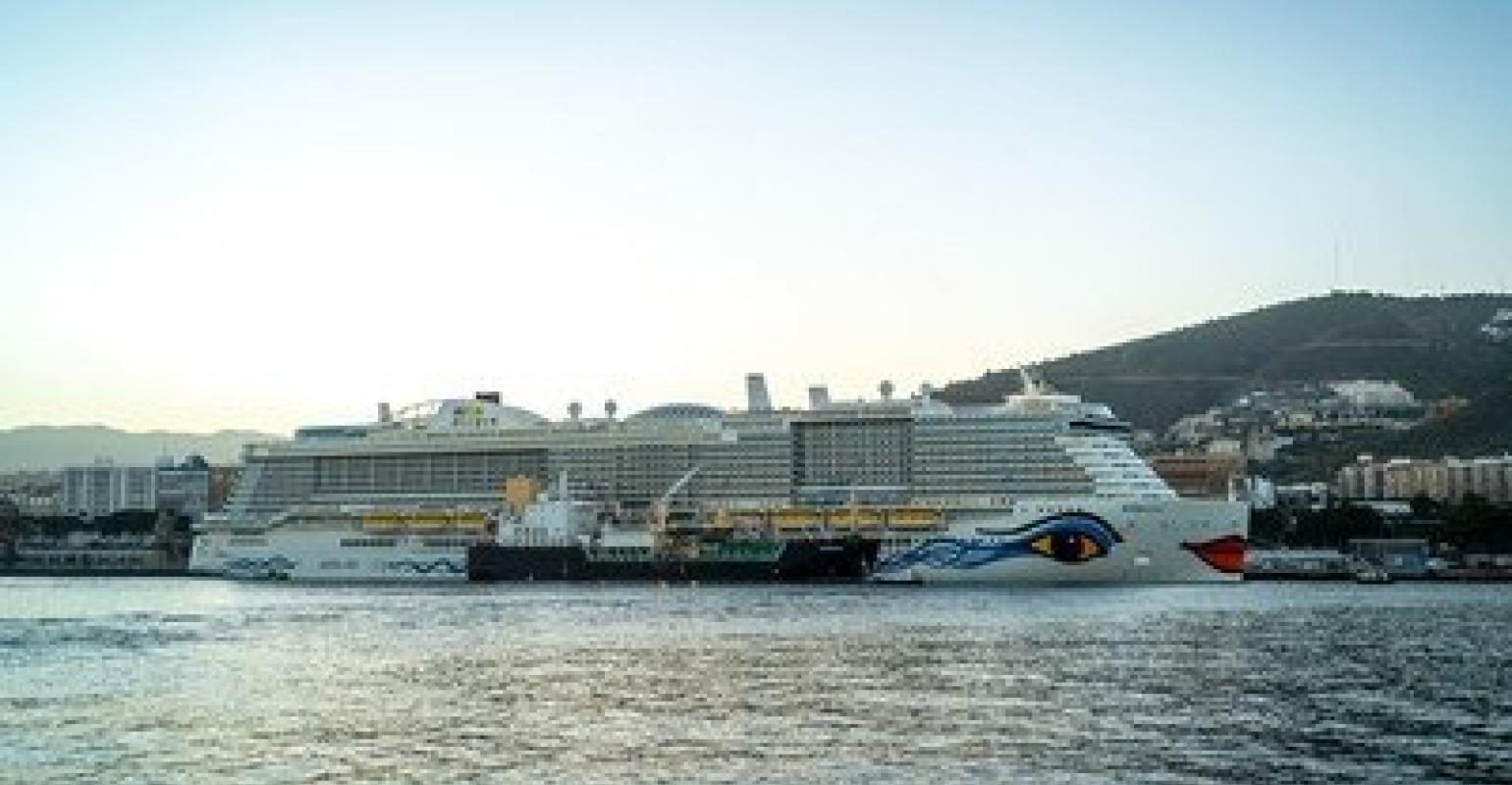 'We are looking forward to a successful premiere season in the Canary Islands,' Eichhorn said, adding that AIDAnova is a milestone for the company and the entire cruise industry.

'With an extraordinary variety of individual vacation options on board and ashore, we are providing new and exciting reasons for people to enjoy a cruise vacation, one of the vacation industry's fastest-growing sectors,' he added. 'Furthermore, with our pioneering LNG technology, we start a new era of even more environmentally friendly cruising.'

The first LNG supply for AIDAnova at the port took place upon its arrival, made possible by a supply agreement signed in 2016 between Carnival Corp. and Shell Western LNG BV to contribute to a robust and reliable LNG fuel supply chain.

The Shell LNG tanker Cardissa, which already supplied the first load of LNG to AIDAnova at Eemshaven in October, conducted the bunker operation.

'We are proud to be on the forefront of advancing LNG as a fuel source for the cruise industry,' said Tom Strang, SVP maritime affairs for Carnival Corp. 'One of the keys to establishing LNG as an industry standard for powering cruise ships is building an extensive, safe and reliable infrastructure for the fuel across the globe, and we look forward to working closely with Shell to support that effort.'

Strang added that the first LNG supply of AIDAnova in the Canary Islands was achieved with the active support of the local port authorities and is the start of building a strong foundation for the future of LNG fuel supply for cruise ships across the globe.

Following AIDAnova, Carnival Corp. has an additional 10 newbuilds on order that will be powered by LNG in port and at sea, with expected delivery dates between 2019 and 2025.

Tahir Faruqui, general manager, Shell global downstream LNG, expressed pride in supplying AIDAnova. 'This milestone is a further demonstration of our strength in providing the expertise and infrastructure required to encourage greater use of lower emissions fuels in marine transport,' he said. 'Carnival Corporation has led by example and put itself at the forefront of the sector by using LNG. We look forward to continuing to work closely with the industry to demonstrate a robust and reliable LNG fuel supply chain in the years to come.'

AIDAnova today welcomed its inaugural cruise passengers for the ship's first seven-day voyage around the Canary Islands and to Madeira. AIDAnova is scheduled to call 16 times until April with an average of at least 4,000 passengers expected per call—2,200 in transit and 1,800 embarking/disembarking. Santa Cruz shares the Canary Islands homporting for AIDAnova with Las Palmas de Gran Canaria, where the ship is expected to make its first call on Saturday.

Tenerife excursions include whale and dolphin watching, visiting the historic district of La Laguna—the only UNESCO World Heritage City in the Canary Islands—and exploring natural attractions such as the Gardens of La Orotava Valley, Anaga Biosphere Reserve or Mount El Teide in the National Park, home to Spain's highest peak and a UNESCO World Heritage Site.

''We have a long history of working with Carnival Corporation and its cruise line brands,' Clavijo said. 'We appreciate their strong commitment to our great port, city and the Canary Islands, and we are pleased about the new concession in the cruise terminal and the maiden call of AIDAnova ... and we look forward to growing this partnership further in the years to come.'

'The tourist development of Santa Cruz will be possible during the next years thanks to the activity of her port,' Suárez said. He noted the cruise business generated an economic impact to the Port of Santa Cruz de Tenerife and the city of Santa Cruz of €24m ($27.1m) in the 2018 cruise season, an increase of €6m from the 2017 season.

Having handled 617,987 cruise passengers in 2017, Santa Cruz de Tenerife is one of the busiest cruise ports in the Canary Islands, the seven-island Spanish archipelago off the coast of Africa and Spain, and the first to attract an investment by a major cruise company.

Seven Carnival Corp. brands—AIDA, Costa Cruises, Cunard, Holland America Line, Princess Cruises, Seabourn and P&O Cruises—field ships that visit Tenerife. The company expects to chalk up more than 300,000 passenger visits to the port in 2018, half of all cruise visits, with 130 calls by 31 ships.

With additional reporting by Frederik Erdmann