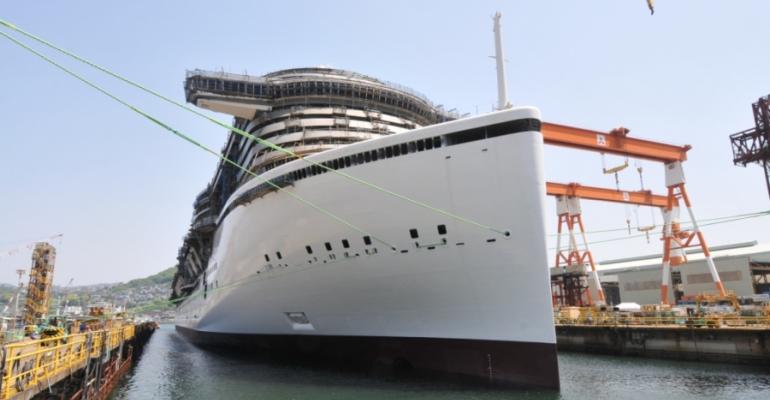 AIDAprima launched in Nagasaki, due for delivery in autumn 2015

The first of AIDA Cruises’ Japanese-built ships, AIDAprima, was launched at the Tategami Plant of Nagasaki Shipyard of Mitsubishi Heavy Industries Saturday.

At 2 p.m. local time, the building dock gates were opened and the ship touched water for the first time.

The 124,500gt newbuild was subsequently towed to the Kojagi Dock on the outskirts of Nagasaki, a journey of about one hour, where further outfitting will take place.

Before work on the ship continues, various technical systems will undergo extensive testing during the next few days.

Delivery of AIDAprima is scheduled for autumn 2015, about six months later than originally planned, due to issues encountered during the design stages, as earlier reported by Seatrade Insider. The maiden voyage is due to depart from Yokohama on October 1 and the ship will initially be deployed year-round from Hamburg to ports in Western Europe.

AIDAprima has capacity for up to 3,300 passengers.

The ship is designed to increase energy efficiency and reduce emissions, with a new hull design and a comprehensive filter system. The innovative exhaust treatment technology is projected to reduce soot particles, nitrogen oxide and sulfur oxide by 90% to 99%, AIDA Cruises said.