All aboard the Venice Simplon-Orient-Express with Azamara 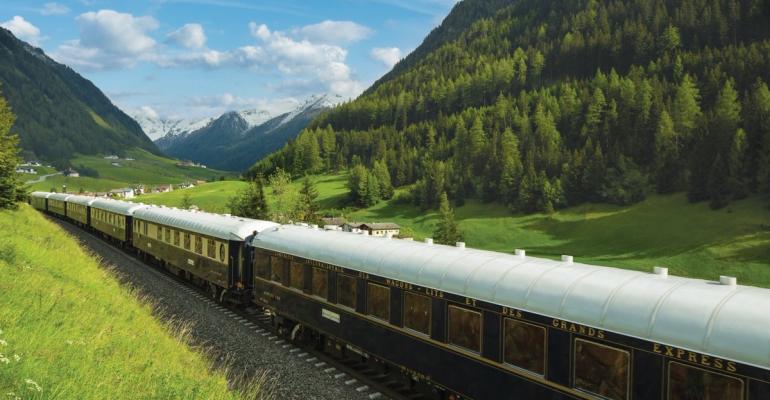 Travelers can relive the golden age of travel in the original 1920s carriages while feasting on gourmet cuisine and spectacular scenery
Azamara Club Cruises teamed with the iconic Venice Simplon-Orient-Express train to offer pre- and post-cruise land packages.

While passengers journey between London and Paris, they can relive the golden age of travel in the original 1920s carriages while feasting on gourmet cuisine and spectacular scenery.

'This slower form of travel is exactly what Azamara celebrates with our destination immersion programming where we look to give travelers more time and new ways to fall in love with destinations,' Azamara president and ceo Larry Pimentel said.

The luxurious private cabins of the 1920s carriages are dripping in history. Sleeping Car 3425, for example, is famously associated with King Carol, who escaped Romania with his mistress aboard the train in 1940. Stunning vintage details such as Rene Prou designs and Rene Lalique glass panels make each carriage feel like a time capsule.

Some of Europe’s most stunning scenery can be viewed through two different routes spanning the Gotthard Route and the Alberg Route with incredible views of the Swiss lakes and the Dolomites.

They can head to Bar Car 3674 for a nightcap before retiring. The next morning continental breakfast is served in each private cabin, followed by lunch in the restaurant car. Travelers relax over afternoon tea as the train makes its way to Venice where they stay overnight in luxury accommodations in the heart of the city.

Passengers on the Venice to London post-voyage depart after a night in a luxury hotel, waving goodbye to Venice over a three-course lunch. Afternoon tea is served in each cabin before travelers mingle in the Bar Car 3674, followed by dinner.

In the morning continental breakfast is served in each cabin, followed by lunch en route to Calais where travelers transfer for the Eurotunnel crossing. On the other side, they board the Belmond British Pullman to travel from Folkestone to London Victoria Station, with afternoon tea served on the way accompanied by a glass of sparkling wine.