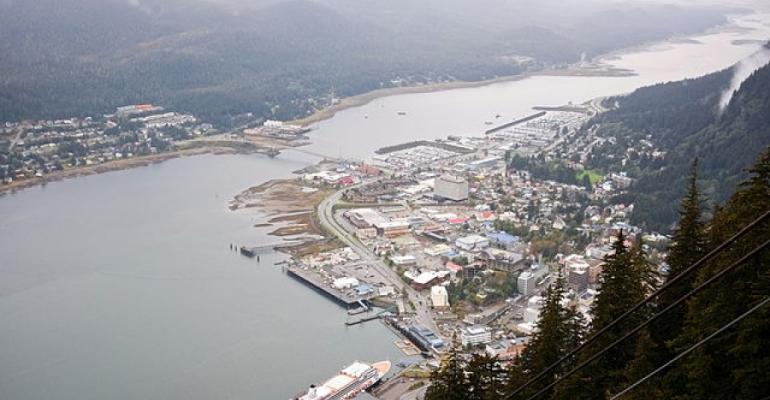 Cruise industry critics have pounced on the apparent spike in violations as evidence of blatant disregard for the environment.

'The cruise companies want consumers to forget that cruise ships are enormous vessels capable of causing severe damage to the environment,' a Skift reporter wrote.

But operators like Royal Caribbean have doubts about the way the violations are determined, and the cruise industry's Alaska association pointed to more than $500m in investments across a range of areas to significantly reduce harmful exhaust emissions from ships.

The NOVs concern alleged violations of exhaust opacity—the denseness in smoke from the stack, not what's in the smoke—under marine visible emission standards in state regulation 18 AAC 50. These standards limit the opacity of marine exhaust within three miles of shore. Visibility is not allowed to be reduced by more than 20% except in designated periods such as vessel startup.

It seems like an unusually steep number of allegations yet DEC told Seatrade Cruise News that only 2014 was 'particularly high' adding: 'However, outliers excluded—it wasn't really that drastically different' than usual.

The Alaska Cruise Association/CLIA Alaska noted each state reading represents a few minutes of emissions monitoring, not the entire time in port.

CLIA Alaska president John Binkley said the NOVs are 'just one step in the process,' and the industry 'now has an opportunity to analyze the reports from smoke readers on the beach and compare it to objective indicators such as ship calibrated instruments, our video footage that records emissions and other data monitoring the status of the engines.

'The state has made its case,' Binkley added, 'and now the industry has an opportunity to respond, and even challenge the reports of human smoke readers.'

Alaska uses smoke readers trained in Method 9, a complex procedure developed by the Environmental Protection Agency that addresses many factors, including discerning steam from smoke.

Rich Pruitt, vp safety and environmental stewardship for Royal Caribbean Cruises Ltd., is concerned Alaska smoke readers may be bundling steam emissions from boiler vents in with the exhaust. Also, he thinks the state's cold, damp climate may be responsible for increased visible steam, since exhaust leaving the stack at very high temperatures creates more steam in cooler air. In warmer, dry climates stack emissions are typically hard to see.

Moreover, Pruitt compares relying on human smoke readers at a time when technology can more accurately monitor exhaust as akin to a traffic cop relying on sight to tell if a car is speeding instead of using a speed gun.

Cruise ships are equipped with high-tech opacity meters that are calibrated by their manufacturers each year before the Alaska season. This same type of equipment is used by the state in testing to certify contract personnel who serve as smoke readers, Pruitt said.

While the Royal Caribbean executive maintained EPA carefully honed Method 9 to take many variables into account, he contends Alaska smoke readers may not be following it uniformly.

Sometimes ships have technical problems that make a darker plume, but those are 'few and far between,' he said. He put the Alaska matters down to a combination of climatic conditions and the way the readings are done.

Pruitt said he's talked with DEC 'many times' over the years about these concerns. Asked about his comments, DEC said: 'Our opacity readers are trained to follow Method 9 and distinguish water vapor plumes from exhaust emissions.'

Pruitt would like to see a shift away from subjective human readers to using today's advanced technology to gauge opacity.

When a ship is observed to be exceeding opacity limits, the state gives notice of a possible violation and asks the cruise line for its opacity meter readings and other data. Later, sometimes a year later, an NOV may be issued.

The fact the state hadn't issued NOVs in five years led cruise lines to believe regulators had agreed with their methodology concerns and things were fine, Pruitt said.

There were initial delays in issuing the 2010 cases, DEC public information officer Candice Bressler responded. During this time, she noted, EPA initiated a sulfur Emission Control Area for much of North America, which includes southern Alaska east of Kodiak.

'DEC expected the reduction of sulfur in fuel to have a positive impact on [visible air] emissions and waited for an improvement and for the EPA to work with companies on implementation of this standard. With no overall improvement seen in 2014, DEC determined that it needed to continue to move ahead in enforcement activities,' Bressler said.

'We are currently negotiating with cruise lines over the violations and offers of settlement. As these are ongoing, we cannot divulge details,' Bressler said.

In a recent financial filing, Norwegian Cruise Line Holdings indicated it is 'cooperating with the state of Alaska and conducting our own internal investigation into these matters. However, we do not believe the ultimate outcome will have a material impact on our financial condition, results of operations or cash flows.'

Royal Caribbean similarly stated: 'We believe we have meritorious defenses to the allegations and we are cooperating with the state of Alaska.'

Penalties per violation could be in the tens of thousands of dollars.