For AmaWaterways, an active focus, more choice and a younger market 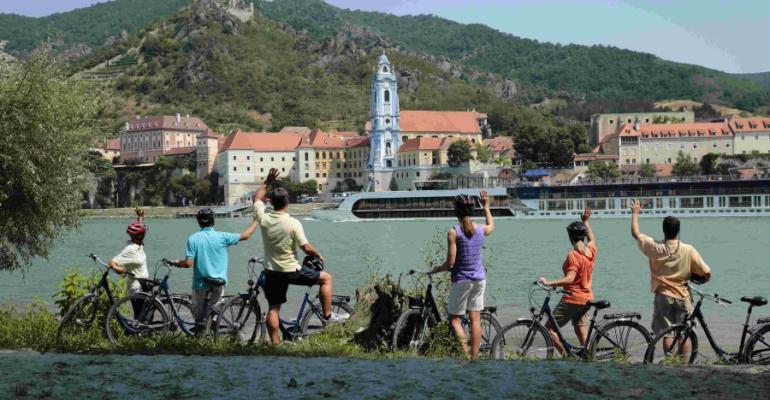 River cruises that are more active, contemporary and in tune with new markets are the forte of AmaWaterways, clipping along at a measured growth rate of two new vessels a year. A partnership with Adventures by Disney will propel river cruising for the family market and a deal with Backroads, the active travel specialist, conveys a lively image and delivers expert-curated bicycle tours.

The bikes, on-board fitness centers and array of excursions cater to younger clients.

'This is the future. Our younger clients don't want to be told what to do,' said Kristin Karst, co-founder and evp of AmaWaterways.

Themes broaden the market, too. Ama's wine cruises are particularly popular—more are added each year and they always fill. Plus, they're a great value, Karst said, since there's no extra price and travelers get to drink some extraordinary wines. Beer, chocolate, art, jazz and Jewish heritage are other themes.

More and more customers come from long-haul markets—Brazil, Peru, Mexico, Hong Kong. Business from Asia is growing by word of mouth among affluent travelers. It makes for a cosmopolitan on-board atmosphere with English as the common language.

With sailings on the Rhine, Main, Mosel, Danube, Seine, Rhone, Douro, Mekong, Ayeyarwady and Chobe, Ama operates in most all the destinations of major interest, where there's plenty to see and do. A new itinerary next year branches into the Garonne and Dordogne.

'China has been on my radar but it has to be the right time and with the right people,' AmaWaterways co-founder and president Rudi Schreiner told Seatrade Cruise News aboard the just-inaugurated AmaSerena in Europe this month. The Amazon is another possibility, but only with a small vessel—20 cabins at most. Italy's Po has too many challenges, in his view.

Like ocean cruising, the river business is subject to geopolitical and environmental issues. Ama is among the operators that pulled out of Russia last year.

Low water resulting from climate change poses an intractable challenge. The Elbe has suffered the most this year, causing other operators to cancel or revise routes, and Ama decided to scrap a 2017 program incorporating Berlin, Magdeburg and Prague timed to the 500th anniversary of Martin Luther's Reformation when a global jubilee will be especially important in Luther's home country, Germany.

After decades of experience, the Austrian-born Schreiner is keenly attuned to all the routes and nuances of itinerary planning—he personally works out deployment for the entire fleet. Plus, Ama fields light, shallow draft vessels that very often can forge ahead in low water periods.

When changes are unavoidable, though, the goal is to deliver the tours as closely as possible to the schedule, and Ama gives a 15% future-cruise credit for each day that's disrupted or a free future cruise if the full seven days are impacted.

Other challenges include peak season crowding when multiple boats line up at a docking station, blocking views for those in the middle. Places like Vilshofen, Germany, one of Ama's turnaround ports, are adding stations.

Overall, it's a good business that continues to grow and entice new entrants. The latest, Crystal River Cruises, plans to begin operating a pair of top-tier vessels in 2017.

Karst said the market is ripe for the intimate, small-ship experience with high customer service and no tendering or hassles. 'The destination is in front of you,' as she put it, and awareness is high: 'A river cruise is on everyone's bucket list.'

Travel agents increasingly understand the distinctions among the brands, and once their clients try river cruising, they're hooked.

Ama's sales with Cruise Planners, the giant home-based agent network, have doubled, for example, and ceo and co-founder Michelle Fee, who served as the godmother for AmaSerena, confirmed business this year is strong. AmaWaterways, she added, has an 'exemplary reputation.'

Important to the Disney partnership but a feature on all future Ama vessels, 2016's AmaViola and AmaStella have connecting cabins for family travelers. Those include a dozen rooms that can sleep three people, six sets of adjoining rooms that can connect and sleep five people each and four suites with convertible sofa-beds for up to four people each.

Schreiner has a zest for innovative ship design.

River vessels, he said, are gradually getting more luxurious. The demand for upper-category accommodations is rising, and operators 'always have to offer more.' The fitness room and salon on Ama's new 2016 ships will be moved to a lower deck, making way for additional balcony staterooms and suites. The 2017 newbuilds will have expanded fitness/spa offerings.

Providing in-room keyboards and Internet access was seen as a must from Ama's start. There's no charge for Wi-Fi. As with all vessels, the service can be spotty, especially on rural stretches of river where the shoreside technology is lacking. Schreiner said usage is skyrocketing and he's just decided to make a hefty investment in improvements.

Ama also hones in on more choice in dining and excursions. The new ships offer a Chef's Table experience in an aft location with big windows.

When it comes to tours, Schreiner sees Ama as 'far ahead of everybody' in included choices.

A range of included options is available every destination. In Austria's Linz, for example, there are six choices—a lot for a 164-passenger ship—a walking tour, castle and culture/biking, full-day (extra charge) or half-day Salzburg excursions, an Austrian lake district tour and the Czech town of Cesky Krumlov.

From the start the company featured bikes and bike tours—which have been extremely popular if the AmaSerena christening cruise this month was any indication. Beyond that the new Backroads partnership, with 20 Danube sailings this year and branching out to most other destinations in 2016, caters to more devoted bikers and hikers.

'The active part is important, to offer nonstop activities,' Schreiner summed up. 'People can choose to participate or not. You offer choices—cater to slow walkers and fast walkers. Individualization is becoming more important.'

The river business will continue to thrive, in the Ama chief's view, but he doesn't anticipate more consolidation in the sector, at least not among the major players in the North America market. The current owners/operators are stable and like to run their own show.

As for Ama itself, Schreiner told Seatrade Cruise News he doesn't have a long-range plan apart from continued innovation.

'We want to enjoy what we're doing. The exciting part for us is new things.'