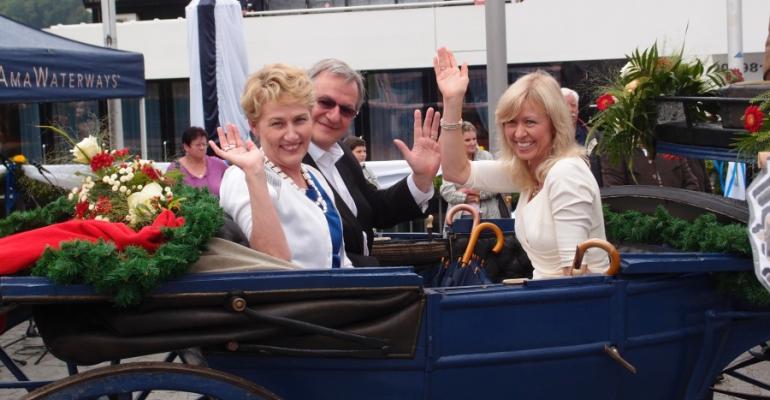 AmaWaterways' christening for its newest river vessel had a traditional Bavarian flair. Godmother Brenda Kyllo arrived by horse-drawn carriage to the Vilshofen pier where an oompah band played and the garlanded AmaSonata was flanked by 14 rugged Böllerschützen (marksmen) in lederhosen.

A fireboat spewing water had escorted AmaSonata to the dock, where townspeople and Ama passengers feasted on wursts, potato salad, giant pretzels and other treats in a bier tent.

AmaSonata is the fifth vessel the company has christened in Vilshofen, and Schreiner promised a sixth next year.

AmaWaterways started in 2002 by chartering one boat, inaugurated its first newbuild in 2006 and will reach 20 vessels in 2015.

In recent years river cruising has 'breathed new life' into the travel business and into little gems of towns like Vilshofen while giving visitors personal interaction with local residents, said the godmother, Kyllo, who is vp for the Canadian Automobile Association. Vilshofen residents have 'done so much to make our passengers feel like welcome guests and not just like passengers passing through.'

Kyllo told Seatrade Insider she was thrilled to name AmaSonata 'because river cruising is so important to the travel industry, and Rudi and Kristin [Karst, evp and co-owner] are wonderful people who run a business with a great deal of customer service and respect. So it's an honor for me to be chosen by them.'

For her part, Karst called CAA 'one of our largest partners and one of our top partners in Canada.'

Also attending were Gary Murphy, vp sales AmaWaterways, and his sister Susan Murphy, who serves on the board. Vilshofen's Beer Queen was on hand, too.

Passengers aboard sister vessel AmaPrima, also alongside, were given the choice of a port call at Regensburg or attending the christening, and they voted for the Vilshofen festivities.

'This is great, really nice. You don't get the opportunity to see this,' said Rhonda Clarke, an AmaPrima passenger from Sydney, Australia, who sipped a wine spritzer with fruit while her husband Alan tried a beer.

Everyone flocked to the waterfront as Kyllo smashed a magnum of Veuve Clicquot on AmaSonata's hull, and Abbot Rhabanus Petri blessed the ship.

After the christening, waiters circulated with flutes of Veuve Clicquot.