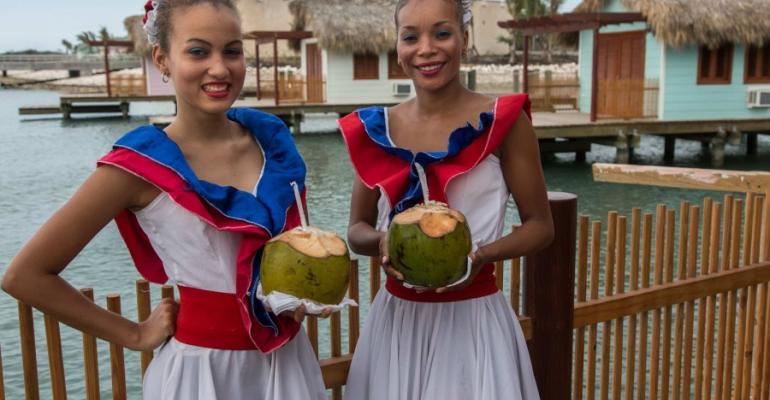 The return of cruise ships to the Dominican Republic's north coast after nearly 30 years is eagerly awaited. When Carnival Corp. & plc's $85m Amber Cove opens in early October, it will spice up Caribbean itineraries and is hoped to spark a regional economic revival.

On Oct. 6 Carnival Victory will become the first of 23 ships from eight Carnival brands scheduled to call. They'll arrive from seven homeports on a wide array of itineraries. They'll bring North Americans, Britons, Germans and Italians—350,000 in the first year.

Amber Cove is 'a refresher for us in the Caribbean. It creates more interest because it's a different place to go,' said Arnold Donald, ceo of Carnival Corp. & plc. He's eager for visitors to appreciate 'how beautiful the water is, the topography and the range of life,' adding: 'Some areas are poverty-stricken, and others are well off.'

According to Carnival's David Candib, vp development & operations, Global Port & Destination Development Group, 'Amber Cove is not the destination. Puerto Plata and the Dominican Republic are really what the cruise port is about.'

Passengers will get to explore a fascinating and friendly region centered around Puerto Plata, where the main plaza will explode in a colorful folkloric fiesta for every ship call, a colonial fort bears witness to pirate history and a museum is dedicated to the yellow fossil resin that gives this region its name, Amber Coast.

There are mangroves, a mountain tram, the house of a national hero who made Puerto Plata (briefly) the DR's capital, art galleries, the Brugal rum factory, Ocean World with marine mammals and macaws, and colorful houses with gingerbread trim.

Small farms and villages are tucked into lush hills dotted with waterfalls, and almond trees shade Puerto Plata's tranquil malecón where people relax at thatched-roof beach bars, snooze on the seawall or string hammocks between the coco palms.

Working with local tour operators, the Carnival Cruise Line team under Mico Cascais, vp tour operations, took the lead on developing 42 tours for the Carnival group brands. They highlight culture and history, give a taste of the locally produced rums, chocolate and coffee, and show how cigars are rolled. There are numerous beach and water-based adventures, a ranch visit, helicopter and golf tours, off-road treks and family/small group and VIP experiences.

Sampled this week by reporters, one outstanding tour, an outback adventure, visits a rural family's simple home and a country school followed by a lunch of Dominican specialties before hitting the beach for boogie boarding.

Because Amber Cove is new and there's so much to do, Cascais expects a higher tour participation rate—60% to 70%—than the 30% to 50% range elsewhere in the Caribbean.

Rannik noted that while 380,000 cruisers visited the Dominican Republic last year, Amber Cove in its first 12 months will nearly double that number.

Built on a 25-acre site at pristine Maimon Bay, Amber Cove has a 390-meter, two-berth cruise pier, a shore excursion pier and a channel depth of 11 meters. Almost half the site—12 acres—comprises a transportation hub for tours and taxis.

Amber Cove has been Carnival's most costly and most challenging port to design and build, Candib said, due to the soil and silt conditions and elements like a four-acre patch of granite rock that ended up being incorporated as a feature. Some 94,000 square meters of land were cleared, 6,200 cubic meters of earth were excavated and six acres of land reclaimed. There are 37,000 tons of rock revetment to protect the surrounding slopes.

From conception to completion, Amber Cove was developed over five years, 'an incredibly short period of time,' Candib pointed out.

The style plays on local architectural elements. One building echoes Fort San Felipe and another La Glorieta, an octagonal structure with Victorian gingerbread details in Puerto Plata's main plaza. A large amber feature with an embedded caiman will serve as a focal point and photo opportunity. Storyboards with quick response codes will tell about local history and culture, from the indigenous Taino people to the Dominican obsession with baseball.

Carnival will not be operating any of the retail or food and beverage spaces. All are leased out.

The Aqua Zone sports a large pool with swim-up bar, slides and a lazy river feature. There's space for a thousand deck chairs—but no beach inside the property. Caribbean Catering Services, a Dominican company, will provide the dining at Coco Caña, the main food and beverage outlet. Music and a DJ will keep things lively.

Dufry is running the large duty-free shopping space, but it won't be like an airport, Candib said, adding: 'We challenged them to create a different experience.' The local amber and larimar, a blue stone, will be featured, along with Caribbean rums. Carnival worked with a local coffee producer and roaster and La Aurora, the venerable Dominican cigar maker, to create experiences around these products. There will be individual souvenir and handicrafts shops.

Colorful over-the-water and hilltop cabanas can be rented. The Gran Cabana, for families or groups up to 12, comes with a private chef, an outdoor shower and a Jacuzzi on the balcony.

Atop a massive slab of granite is the 360 Bar with panoramic views and a zip line. Riders will land not far from a building for cruise ship crew members. There's a children's playground, too.

Amber Cove is 'a golden opportunity,' in the words of Julio Almonte, vice minister of tourism for the Dominican Republic. 'In one year, we'll achieve what it took La Romana port 20 years to reach' in passenger numbers, he said.

In recent decades, thriving Punta Cana drained much of the north coast's tourism business, so unemployment is steep around Puerto Plata. Amber Cove is expected to provide 90 to 100 direct jobs at the port, with 400 more indirect jobs projected.

The area is a hive of activity in preparation for the port's October opening. A road is being enlarged to four lanes to ease tour and taxi dispatch. A new pedestrian boulevard will link the city with Fort San Felipe, where gardens and a waterfront amphitheater are going up. Free folkloric performances are planned when cruise ships call, Almonte said.

This week, when a busload of 25 international media arrived at Puerto Plata's Plaza Independencia, they were surprised by masked dancers, stilt walkers and a merengue band—a preview of what will take place there every time a cruise ship visits. Government officials even made a proclamation citing the importance of the media before joining the dancers in a show of the irrepressible Dominican spirit.

A bevy of public education programs and focused efforts like the Florida-Caribbean Cruise Association's Taxi Pride training and the Aquila Tour Guide Excellence certification are under way. The training is intended to be ongoing.

'The future of Puerto Plata is here,' Almonte said. 'Everyone is really excited about this project.'