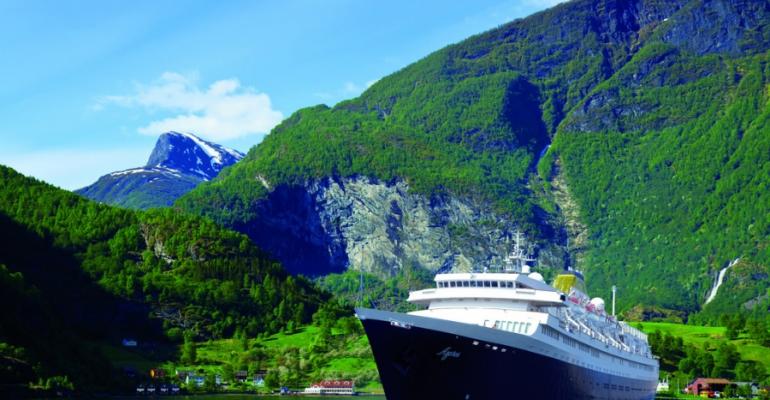 German operator Ambiente Kreuzfahrten is leaving the market – this time for good.

The owner of the Ambiente brand, Berlin-based FFR Ferien-, Freizeit- und ReiseService GmbH, has announced it is terminating its cooperation with Portuscale Cruises and cruises on Azores on September 5, 2014, citing dissatisfying bookings as the reason for withdrawal.

Azores will depart on her last voyage for Ambiente on August, 29.

Ambiente/FFR and Portuscale Cruises agreed a long-term cooperation last year. According to Ambiente, some teething troubles and slow bookings had been anticipated, but the results achieved so far are way behind all expectations.

Voyages have been cancelled and itineraries alternated; only recently Portuscale Cruises decided to withdraw a North Cape cruise in June due to booking volumes well below the defined minimum number of passengers.

The 16,144gt Azores encountered trouble on her maiden voyage for Ambiente in March after departure from Lisbon was delayed, and some passengers disembarked before the vessel eventually set sail.

The two companies have now agreed an early end of their cooperation – a step which the German operator describes as a result of ‘economic rationality’.

FFR’s md, Claus-Josef Wilm, said the decision had been taken after careful evaluation of the German cruise market and led to the decision to discontinue the Ambiente Kreuzfahrten brand in early September.

Azores will depart on her last voyage for Ambiente from Bremerhaven on  August 29. After calls at Bergen, Hellesylt, Geiranger, Vik, Flåm, Stavanger and Kristiansand, the ship returns to Bremerhaven on September 5.

‘Up to that date, Portuscale has assured us that it will operate all itineraries which have not been cancelled so far,’ Wilm stressed. Deposit payments received for later cruises will be returned to customers soon. The Ambiente/ FFR team is also assisting clients in finding alternative cruises onboard other ships.

The Ambiente Kreuzfahrten brand was launched back in 2011: politically neutral (without any indication of the link to the German Social Democratic Party which owns FFR), it aimed to supply the German source market with modestly priced cruises on older, small ships.

Operations started in 2012 with Princess Daphne chartered from Classic International Cruises. In 2013, an extension to a two-ship operation was planned with Athena.

Cooperation between Ambiente and CIC came to an untimely end as the Portuguese operator collapsed in autumn 2012, before the end of the season. This bumpy end turned the otherwise fairly successful first season with Princess Daphne into a rather costly affair for FFR and its parent company, Deutschen Druck- und Verlagsgesellschaft (DDVG).

After a pause in 2013, FFR had hoped for a dynamic return to the market with Azores this year.

The end of Ambiente Kreuzfahrten does, however, not mean the end of FFR’s commitment to cruising. SPD-ReiseService, another FFR-brand, has regularly chartered ships for single cruises in the past, and is continuing to do so.

On May 31, plantours & Partner’s Hamburg will embark on an 11 day charter cruise from Kiel to the Baltic on a cruise for ‘members and friends of SPD’, claims the website. Two further itineraries onboard Hamburg scheduled for later this year.