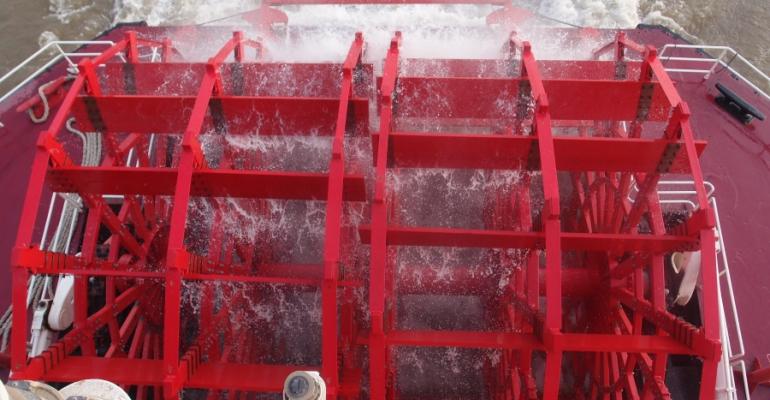 American Queen is temporarily sailing without its iconic paddlewheel

To avoid flooding on the Upper Mississippi, said to be approaching the record 1993 levels, the American Queen steamboat will switch to Ohio River itineraries in the coming weeks as the vessel sails, temporarily, without its iconic red paddlewheel.

The revised routing will affect the next three cruises—July 9 between Cincinnati and St. Louis, and July 15 and 23 between St. Louis and St. Paul, Minn.

The new itineraries will sail between Cincinnati and Paducah, Ky., calling on Cave-In-Rock, Ill.; Henderson, Louisville and Augusta, Ky.; and Madison, Ind. Passengers on the July 9 voyage will travel by motor coach from Paducah to St. Louis at the end of the cruise. The July 15 pre-cruise hotel stay in St. Louis remains and passengers will be bussed to Paducah to embark American Queen.

The July 23 voyage will depart Cincinnati, replacing St. Paul, and itinerary details will be available soon.

Customers who sail on the new Ohio River routes will get a $500 future cruise credit per stateroom and a $100 on-board credit per person. Those who opt to rebook on Upper Mississippi cruises later in the summer will get a one-category upgrade.

'We postponed [the Upper Mississippi season] two weeks this year, thinking we would be in the clear,' said Ted Sykes, president and COO of American Queen Steamboat Co. Last year the company had to drop its July 5 and 13 cruises between St. Louis and St. Paul due to flooding. The Ohio River was substituted then, too.

Sykes said the company has put together interesting new itineraries and an attractive shore excursion program.

Meanwhile, American Queen continues operating without its paddlewheel, as earlier reported. The shaft has what Sykes described as a 'hairline crack' and is being trucked to New Orleans where a metallurgist will look it over.

Sykes noted the shaft had been replaced last year, at considerable expense, and the company seeks answers to why the same issue came up again.

'Our plan is to strengthen it and put it back on within the next couple of weeks,' he told Seatrade Insider late Monday. He said the wheel can be reinstalled in port with no disruption to the itinerary.

One week ago, during an unscheduled, approximately 36-hour stopover at Maysville, Ky., the boat had one of its Z-drives replaced. The 215 passengers remained on board during the repairs before American Queen continued to Pittsburgh where the vessel turned around over the weekend. Those on the disrupted cruise were offered free passage on the current sailing from Pittsburgh back to Cincinnati, or 25% off their fare for a future sailing.

Skyes said more than 20 cabins, or 40-plus passengers, opted to stay on board for the free cruise.

While American Queen can sail on its Z-drives alone, it must be disappointing for passengers who don't get to see the steam-driven paddlewheel in action.

Sykes said the boat still offers entertainment, a fine dining experience and river views from the rocking chairs and porch swings on the popular forward-facing deck outside the Front Porch Café.

'It's just that we don't have the paddlewheel flapping in the back,' he said.