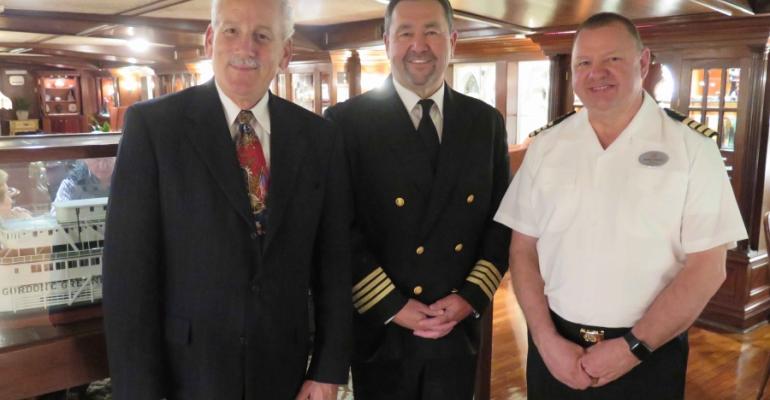 With demand strong and many sailings sold out in its fifth year of operations, the American Queen Steamboat Co. is looking to buy or build a boat to expand into the Great Lakes and perhaps operate off-season in Cuba.

The company has a bead on several vessels, including Saint Laurent, which recently sailed for Haimark Line, and is considering if building a US-flag vessel is a viable option, chairman and ceo John Waggoner told Seatrade Cruise News.

Waggoner thinks capacity in the 200- to 250-passenger range is ideal because 'Passengers get to know each other.'

AQSC's American Empress paddlewheeler in the Pacific Northwest carries 223 passengers, while its American Queen in the Heartland holds 432.

If AQSC is able to acquire a vessel, operations could begin in 2017. Building would take longer, of course, probably three years.

'We're working with a naval architect while at the same time scouring the global market for a ship that could work on the Great Lakes,' Waggoner said. As the company carries out its due diligence, it expects to take a decision about how to grow in the June or July timeframe.

AQSC's syndicate of banks is poised to support the expansion, according to Waggoner and Ted Sykes, president and chief operating officer.

'Financing is not an issue,' according to Sykes, noting that AQSC was refinanced last year and both its vessels were acquired at 'very attractive prices.' Meanwhile, sales are going strong, in both the Heartland and Pacific Northwest.

Fresh from $2m in off-season improvements, American Queen is looking and running better than ever, repeat bookings are up, and key travel partners are asking for a Great Lakes vessel so the company is confident of their support, Sykes said. Travel agents and international general sales agents are the biggest source of business, spread across FIT, group, alumni and charter/incentive sales.

AQSC has identified three to four vessels that may be suitable for Great Lakes and coastwise operations. During off-season for the Great Lakes, Cuba would be an ideal destination—though AQSC is content to let someone else pioneer that program, Sykes added.

'We want to be the dominant player on the American rivers offering old-style hospitality,' as Sykes put it. Competitive edges include fine dining, extensive entertainment and highly rated shore excursions, with Hop-On, Hop-Off tours included at every port.

'We realize we're probably not going to be able to continue that [style of cruising],' Sykes said. If the company builds, it wouldn't be a paddlewheeler.