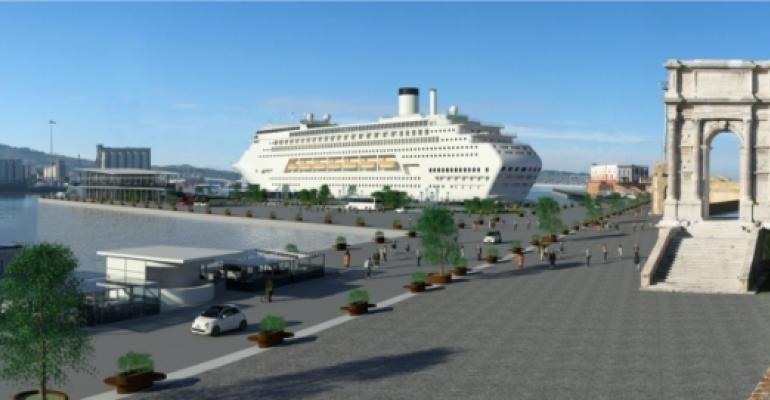 Adriatic port authority of Ancona is working with the regional and city administration to build a dedicated cruise berth and terminal, close to the city centre.

Last September, the port authority received the green light to renovate the old port area, characterized by the Roman Trajan Arch, to provide a dedicated cruise berth and terminal on the old town’s waterfront.

Formerly dedicated to cargo operations, the pier is to be re-profiled to offer two berths of 255 and 190mtr respectively with a depth of 9mtr and a terminal.

The port authority has allocated funding of €8m of which €4m will be spent on re-styling and equipping the berthing for ships over 250mtr long.

However the entire renovation project of the 2 km old port area known as ‘Ancona Open’ requires an additional €10m, which needs to be funded by the private sector.

‘An agreement for the management company structure for the cruise facility is due to be formalized by end 2014 and a tender for the design work issued in 2015, with work starting a year later and to be completed in time for the 2017 cruise season,’ Rodolfo Giampieri, special advisor to the port authority told Seatrade Insider.

‘MSC has already signed an agreement to bring ships to Ancona for the next five years, while discussions are on-going with Costa Cruises which is already using Ancona as a homeport for 2015,’ said Giampieri.

MSC has expressed interest in participating in the cruise terminal managment company, where the port authority and other regional and local institutions, will maintain a minority share,’ he added.

Although cruise calls and passengers are down this year compared to last, the port anticipates a return to 2013 levels in 2015 with 70 calls and 110,000 passengers expected.

The port authority calculates that a homeporting vessel contributes around €4.5m a year with every passenger embarking in Ancona, spending an average of €77 in the city, which figure drops to €62 for a passenger in transit.