Andy Stuart on 'the perfect storm of positives' for Norwegian Bliss 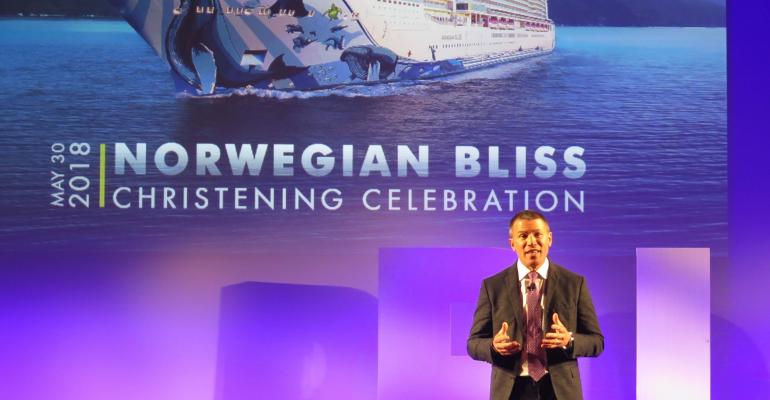 Andy Stuart - Thanks to Bliss, agents who 'never had Norwegian Cruise Line at the top of their list are now taking notice'

The Panama Canal's expansion enabled NCL to branch out to the West Coast with this record-smashing ship. The strong demand for Alaska cruises, the West Coast's hunger for a new ship and even the choice of radio personality Elvis Duran as the godfather 'had a big impact,' Stuart said.

The NCL chief has always been a big fan of Duran's radio show, which is syndicated throughout the US and draws 8m to 10m listeners. The audience skews a bit younger than Norwegian's client base, so Duran is exposing a new market to cruising.

When Stuart went on the air last November to invite Duran to be the godfather, the agreement was for 10 minutes of chat about Norwegian Bliss.

'Fifty minutes later, we were still talking,' Stuart said, and that enthusiastic engagement by Duran and his cast has been true ever since. For example, when Froggy—who calls himself 'the guy in the studio in Miami,' who was already an avid NCL cruiser—went to Meyer Werft to see the ship under construction, that fueled several segments of chat about Bliss.

'I genuinely think [Duran's coverage] is a big part of why the ship is so well-booked,' Stuart said. 'Of course, we've had some good marketing, and the ship is fantastic.'

Bliss has been shown off more extensively than any other Norwegian newbuild. Stuart himself has been aboard 19 days for inaugural sailings in Europe, New York, Miami, Los Angeles and, currently, Seattle.

What's surprised him at all the stops is 'the overwhelming excitement about the ship. The most exciting thing is that [travel partners] who only sell Regent or only sell suites are saying "But this ship, we could sell" because of The Haven, the decor, the food and the service. That has blown me away,' Stuart said. 'So folks who never had Norwegian Cruise Line at the top of their list are now taking notice.'

Alex Sharpe, president of Signature Travel Network, is aboard Bliss with 10 Signature owners and 90 consultants, most from the West Coast. 'Our members are excited to sell it. To have a new ship on the West Coast, especially of this caliber, for us, it's a big deal,' he said.

Historically, Miami-based Norwegian has been an 'East Coast-centric brand.' Its newest ships—Escape, Getaway, Breakaway—all debuted and sail on the East Coast, and last year's Joy was built for China.

The Panama Canal's expanded locks created the opportunity for Norwegian to introduce Bliss on the West Coast.

'Alaska is a great destination for us, and one of the few where we've not added capacity recently,' Stuart said. This season, besides the 168,000gt Bliss, NCL has Norwegian Jewel (which replaced the smaller Norwegian Sun) and Norwegian Pearl sailing there.

The Alaska market has held steady at just over 1m passengers for some years due to infrastructure limitations, but those are being addressed and a number of lines plan to send bigger ships. (In 2019, in addition to Bliss's return, Royal Princess, Ovation of the Seas and a pair of Celebrity Solstice-class ships will cruise in Alaska.)

'We're enthusiastic about the opportunity to invest and partner with the destination,' Stuart said, adding that public-private partnerships will enable the cruise industry to continue to grow in Alaska.

Following this inaugural season there, Norwegian Bliss will head back down the West Coast, making a maiden call at the Port of San Francisco and sailing half a dozen Mexican Riviera cruises from the Port of Los Angeles.

Noting that 'Los Angeles has tended to have older ships,' Stuart said 'Bliss is exciting for that market and we're seeing a lot of demand.'

Bliss will then operate from PortMiami in the winter as NCL resumes its eastern Caribbean routes after giving time for destinations like Tortola to recover from last year's powerful hurricanes. According to Stuart, Bliss's eastern Caribbean cruises are 'selling very well.'