Another historic rendezvous on Sydney Harbour 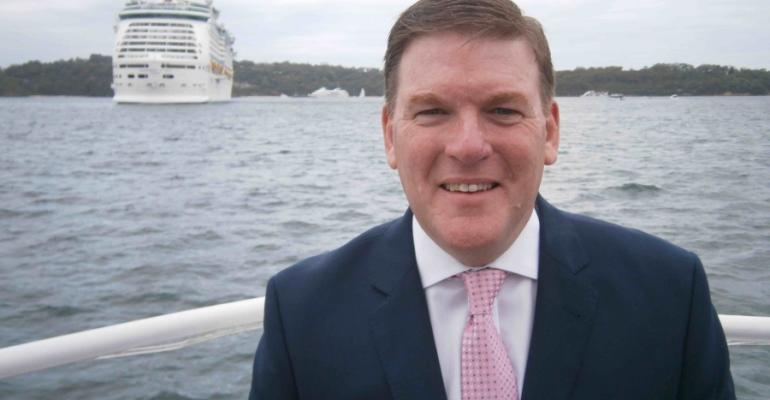 Just days after P&O Cruises Australia’s five-ship spectacular on Sydney Harbour, Royal Caribbean’s Explorer of the Seas and sister ship Voyager of the Seas crossed paths early Saturday evening with a backdrop of the Sydney Harbour Bridge and the Opera House.
The 138,000gt Explorer of the Seas, which arrived earlier than scheduled due to a medical evacuation, was making her maiden voyage to Sydney for the start of a cruise season that will run until April.
However, she waited for Voyager of the Seas, which was departing on a seven-night cruise to Tasmania, just off Fort Denison.
Size does matter according to RCL’s commercial director Australasia and South East Asia, Adam Armstrong. Armstrong said the 138,000gt Voyager of the Seas has been the biggest cruise ship to homeport in Australia for extended seasons since 2012. Explorer of the Seas now takes that honour as, according to Royal Caribbean International’s website, she is five feet longer.
He said the two ships were carrying more than 10,000 passengers and crew, outnumbering the populations of New South Wales towns like Parkes and Byron Bay.
‘We live for big ships and the huge variety of experiences that our megaliners offer our guests,’ he said. ‘We couldn’t be more proud to welcome Australia’s biggest cruise ship to her new home and for our two magnificent megaliners to meet in beautiful Sydney Harbour.
‘With a combined build price of US$1.3bn and a further US$130m injected into bow-to-stern makeovers in the last 12 months, they represent the biggest investment ever made by a cruise line in Australia.’
The 3,114-passenger Explorer of the Seas has replaced the 2,400-passenger Rhapsody of the Seas, Royal Caribbean’s first ship to be deployed in Australia when she arrived in October 2007.
Radiance of the Seas completes the trio of Royal Caribbean ships in Sydney for the 2015-16 season, with the 69,130gt Legend of the Seas based in Brisbane from December on a maiden five-month season.
The four ships will increase the company’s capacity in Australia by almost 50%.
Royal Caribbean hosted a cocktail reception for media and travel industry partners Saturday night on board a launch that sailed past the two ships mid-harbour.
Copyright © 2023. All rights reserved. Seatrade, a trading name of Informa Markets (UK) Limited.
TAGS: ports & destinations cruise lines ships
0 comments
Hide comments
Related