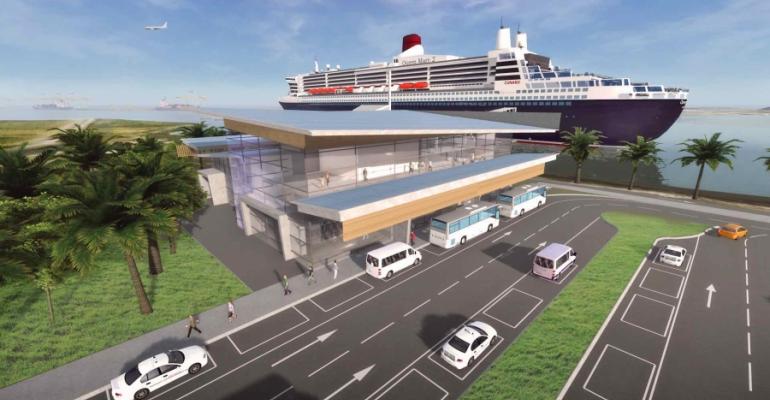 Queensland treasurer Curtis Pitt and Port of Brisbane ceo Roy Cummins have signed a process deed that sets out detailed guidelines for the proposed A$100m second cruise ship terminal for Brisbane.
As reported here, the Queensland government in February gave preliminary approval for the terminal to be built on land at Luggage Point at the mouth of the Brisbane River.
‘The Port of Brisbane has already been busy preparing preliminary information as part of its detailed assessment of the cruise ship terminal, but the signing of this process deed enables them to get the work under way in earnest,’ Pitt said.
The existing cruise ship terminal at Portside Hamilton can only berth vessels up to 270mtrs because of the narrow, shallow depth of the river and height restrictions of the Sir Leo Hielscher Bridges.
Cummins said Brisbane needs a dedicated cruise facility that can accommodate cruise ships of all sizes—including mega-liners—to ensure South East Queensland does not miss out on future visits.
‘Luggage Point meets the very specific physical and technical requirements needed to accommodate these cruise vessels, such as access to deepwater, an existing swing basin, as well as proximity to the airport,’ Cummins said.
He said the process deed is an important milestone and Port of Brisbane looks forward to working collaboratively with the government and other key stakeholders on the project.
‘If our proposal proceeds, Port of Brisbane will deliver a modern, efficient and attractive terminal that will become a tourism gateway for thousands of international and domestic visitors into South East Queensland every year,’ he said.
It is understood Port of Brisbane hopes to start work on the terminal next year, with a view to opening it to the biggest cruise ships afloat by 2019.
Copyright © 2022. All rights reserved. Seatrade, a trading name of Informa Markets (UK) Limited.
TAGS: ports & destinations cruise terminals government
0 comments
Hide comments
Related