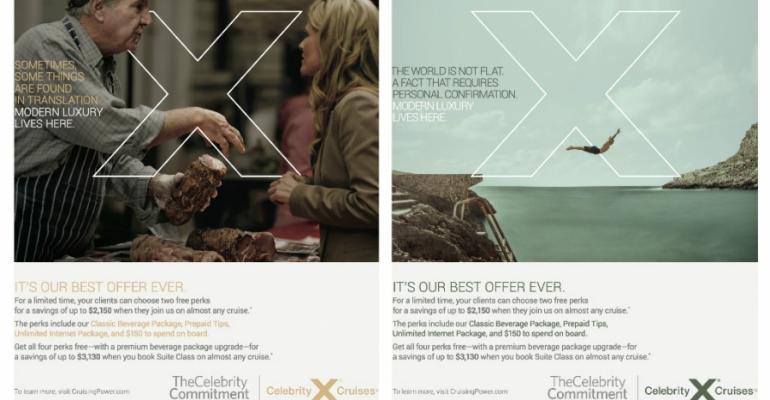 In the print ads, the X is particularly bold

A woman at a newsstand, a man at a cafe, someone dreaming, someone in spinning class, an architect giving a presentation—they're all hearing subtle music and a mysterious call.

The word is called from a sommelier serving guests at the Lawn Club, a spa therapist, a chef shopping at a market and, ultimately, a captain on the foredeck—all, real Celebrity Cruises crew members.

Gradually those who hear, respond in a quirky 'Marco ... Polo' call and response.

The commercial, the first work of Celebrity's new advertising agency, Venables Bell & Partners, will air on national television, with the heaviest media spend in the first quarter, wave season. Print advertisements and digital elements are scheduled, too.

'This is one of the most important things this brand has done in many years,' Celebrity president and ceo Lisa Lutoff-Perlo told Seatrade Cruise News.

For 'Answer the call of Modern Luxury,' Celebrity has a larger media spend than ever before, particularly in the first quarter, wave season, and a bigger spend in television especially.

The line has run TV ads for a long time, on cable and local channels. 'This is a bigger splash,' Lutoff-Perlo said. Spots will air in key cities like Los Angeles, New York, San Francisco, Chicago, Miami and Boston and on national networks such as Bravo, HGTV and The Travel Channel.

'Seventy percent of our target is 10% of the zipcodes,' Lutoff-Perlo noted.

Print placements are scheduled in publications including Travel+Leisure, Bon Appétit and Food & Wine. There are digital elements, too.

He described the approach as having a 'one-two punch'—the call to like-minded travelers and showing how different Celebrity is.

'Forget about the cruise industry. Let's talk about the people,' is how it began. 'We are reaching and attracting modern luxury travelers who have a desire for more authenticity, taste and higher expectations. We want to make sure we're tapping into the mindset and relating how Celebrity Cruises is so far superior and interesting,' Venables said.

'The cruise industry is pretty bankrupt with cliches,' he continued. 'The images all blend together. There's no true differentiation.'

'Answer the call' conveys real images from the ship, like the Lawn Club. And real people, including Capt. Emmanuel Alevropoulos ('Capt. Manos'), send out the call.

In an analysis leading up to the campaign, Lutoff-Perlo said VB&P decided to 'Celebrate what we do. Yes, we are a cruise line. Keep "Modern Luxury." It works. It resonates. We just need to tell our story in a more compelling way.' [From that sprang] "Celebrity Cruises: Modern Luxury lives here," and all the wonderful things we offer.'

A third consideration was how to use the X? 'It's powerful, but it's hard to explain,' Lutoff-Perlo said. The agency 'dialed it up in everything we do, and did it in a lively way.'

It plays a kinetic role in the 'Answer the call' tagline in the television spots, with the X emerging from the center of the ship. In the print ads, it's particularly bold.

The roots for the new campaign were planted last summer when Lutoff-Perlo was not satisfied the brand was moving forward fast enough. She felt it was so important that she personally traveled to advertising agency meetings.

VB&P appreciate the chief executive's involvement, and Venables himself 'likes the fact that I really want to be disruptive,' Lutoff-Perlo said, adding the boutique agency couldn't be a better partner.

In retrospect, the Celebrity chief thinks it was destined for them to work together. In 2011, Lutoff-Perlo saw the Venables Super Bowl spot for Audi that conveyed the brand as 'luxury evolved,' distinguishing it from 'old luxury,' represented by Mercedes—what she called 'a wow ad.'

'It was provocative,' Venables concurred.

For Lutoff-Perlo, Celebrity was the Audi. She burst in to Dan Hanrahan, her boss then, and said: 'That's it! Celebrity is modern luxury.'

And so it has been, ever since.