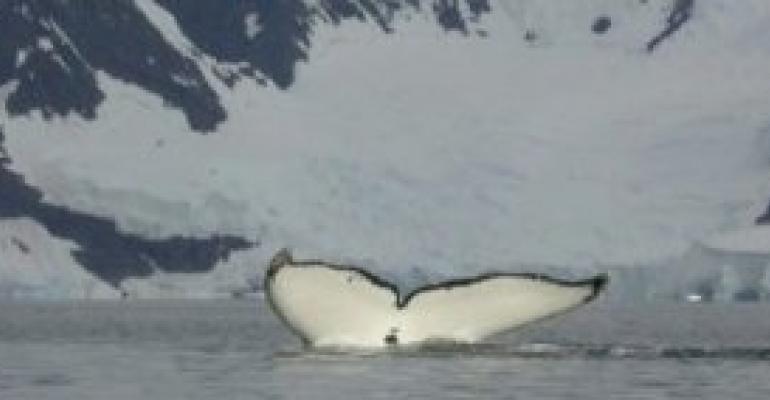 The Happywhale tracking initiative reported many more sightings of humpback whales during the recent Antarctica season than the previous one PHOTO: IAATO

At its annual meeting, which wrapped up today in Cape Town, South Africa, IAATO members approved new measures for operators to commit to either a 10-knot speed cap within a specific geo-fenced time area on the Antarctic Peninsula or, for member operators who have a whale strike mitigation training program, an extra watchman on the bridge to monitor and record sightings within the geofenced time area.

The compulsory measures will formally take effect on July 1 in readiness for the 2019/20 Antarctic travel season, which begins in October.

'IAATO is a trusted and valued Antarctic stakeholder thanks to its demonstrated commitment to safe, environmentally responsible travel through decisions like the one we have reached this week regarding the protection of whales,' incoming IAATO Executive Committee Chair Mark van der Hulst said.

'It is both an Antarctic Treaty System and IAATO requirement that our activities as tour operators have no more than a minor or transitory impact on the Antarctic environment, and while the proposal was initially delivered as a request for operators to adopt one of the two mitigation measures, the strength of feeling in the room was such that members insisted on going one step further and making the new measures mandatory.

'We have a track record of stringent, proactive self-management and this decision is no exception,' van der Hulst continued. 'This is a proud moment for IAATO and hopefully a defining one for our industry.'

Since the commercial whaling ban in 1982, nearly all humpback whale populations in the southern hemisphere are recovering, some at rates near their biological maximum. But with these increasingly whale-rich waters comes an increased risk of whale strikes in areas of high aggregation such as those used for feeding, breeding, raising offspring, socializing and migrating, which are essential for survival. By committing to the new mandatory measures, IAATO member vessels are supporting the return of this species.

During the 2018/19 Antarctic travel season, Happywhale, an initiative which tracks individual whales throughout the world’s oceans, recorded more than 900 humpback whale sightings in Antarctica, 333 as known individuals, compared to just 700 sightings during the same period last year.

Ted Cheeseman, owner of IAATO member operator Cheesemans’ Ecology Safaris, co-founder of Happywhale and a driving force behind the proposal, said: 'I’m extremely proud of IAATO for taking this bold step to reduce risk to whales, even while very little is known about the actual distribution of whales on the Antarctic peninsula.

'Here a group of competitors have chosen to limit operations in order to protect all whales in the area, because we feel it is the right thing to do. The next step from here is to support and undertake the science that will inform a future policy that best minimizes risk while maintaining operational freedom.'

Cheeseman called it 'incredibly inspiring to see that Antarctic travelers are being treated to more and more whale sightings. Year-on-year the whales are rebuilding populations towards what was natural before the whaling era.'