Antigua positions itself to capitalize on cruise growth 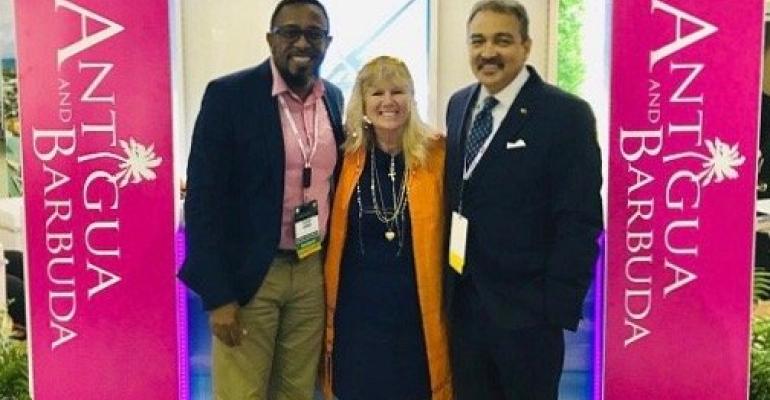 Antigua is in the spotlight as the first place to bag a Royal Beach Club, a new Royal Caribbean destination concept planned for 2021. The island also will see the completion of its new Oasis-class berth and improved passenger reception facilities under a long-term agreement with Global Ports Holding.

Cruise ships carry travelers of all income levels. ‘You can sell a Rolex or a T-shirt, or both,’ Fernandez said.

Also, cruising appeals to millennials, drawing a new, younger market to Antigua, one that is more adventurous and seeking new experiences. At the same time, affluent seniors are able to take the longer cruises that reach the eastern Caribbean. A record number of ships are being built, and more will homeport in Puerto Rico, enabling Antigua to be part of weeklong itineraries.

All of this augers well for cruise growth, Fernandez said.

Since Antigua lacked the financing to make needed improvements to keep cruise visitors happy, the government forged a deal with Global Ports Holding, with Royal Caribbean as a partner in that. GPH will be completing the Oasis-class pier in St. John’s and is working to improve passenger flow, ground transportation, retail and services.

‘We will be building out more shops and restaurants, adding on to what we have. They will work with us to manage taxis more efficiently,’ the minister said. Customer service training will continue.

The destination can offer bunkering and, given the number of LNG ships on order, the government will be looking into the feasibility of providing LNG, which would need to be imported.

Antigua currently handles about 800,000 passengers annually, a figure that is expected to grow to 1.2m to 1.3m within three years, after the cruise port project is completed.

Carnival Corp. is currently the largest cruise group, but Fernandez thinks Royal Caribbean may overtake it by 2021.

Eye on the environment

While Antigua is keen on cruise growth, ‘We have to be very careful we don’t over-exploit the environment,’ the minister said.

Accountability for environmental issues is very important. ‘Now the world is watching,’ Fernandez said. ‘Our government has done more, much more, in terms of protecting our environment.’

Among the actions are a ban on single-use plastic and Styrofoam containers, while a plastic recycling plant is planned to reduce the volumes of waste going into landfills. Reefs have been marked to notify vessels to take care when anchoring, and officials are considering how to monitor ships to ensure they aren’t illegally discharging sewage.

As for the proliferation of sargassum, which has plagued many Caribbean and Gulf of Mexico destinations, ‘We’ve been relatively unaffected,’ the minister said. No hotels had to be closed this year because of it.

With crowding and record temperatures impacting Europe during the summers, Fernandez thinks the Caribbean could present itself as a more pleasant option. To boost tourism from the May to October shoulder season, the Antigua and Barbuda Tourism Authority launched a campaign, #WhatCoolLooksLike.

The campaign ran in the US, Canada, UK and Caribbean, spanning television, radio, digital, social media, print, public relations and outdoor advertising. It resulted in increased arrivals this year.

‘The Caribbean in summer will become an important thing,’ Fernandez predicted.

The minister led Antigua and Barbuda’s delegation to the Florida-Caribbean Cruise Association Conference & Trade Show in Puerto Rico last week. Fernandez said the event was a valuable way to meet with senior officials from a range of cruise lines over a three-day period.

The minister welcomed Barbados Prime Minister Mia Amor Mottley’s keynote address about the Caribbean’s vulnerability to global warming and the need for cruise line partnership and financial assistance to shore up infrastructure.