For AQSC's John Waggoner, 'a relentless pursuit of perfection' 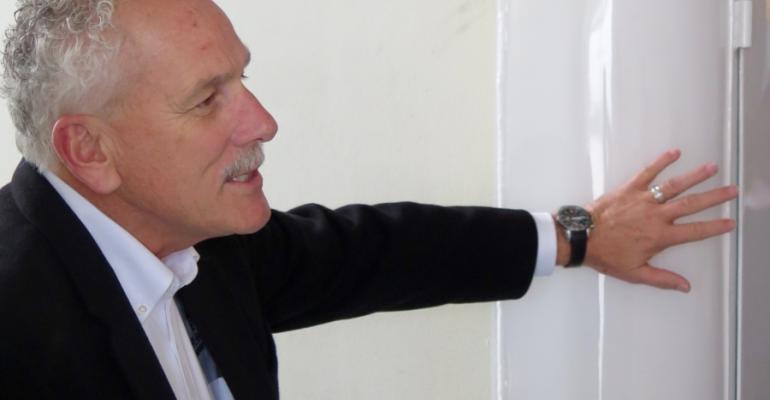 Not just any white paint would do. To refresh the world's largest paddlewheel steamboat, John Waggoner was exacting.

For the chairman and ceo of American Queen Steamboat Co., it had to be Awlgrip two–part linear polyurethane yacht white paint. Waggoner overruled his technical team, which had balked at the cost.

To show why he insisted on Awlgrip polyurethane—the same stuff used on yachts—Waggoner began a tour of the paddlewheeler American Queen, fresh out of its $2m annual lay-up, at an obscure bulkhead. There were contrasting patches of paint—one dull and vaguely yellowish, the other pure white and shiny, the Awlgrip. It was a dramatic difference.

Another change was adding mahogany rails—900 feet of them per deck. 'I was on Queen Mary 2. I love mahogany rails,' Waggoner explained.

In other work, all of American Queen's mahogany doors were removed, sanded and triple-coated with varnish. They got new trim, new brass kick plates and new weather stripping. A rock tumbler was used to polish the brass 'keys' that hold open the staterooms' French doors.

It all adds up, in Waggoner's view, to making a wonderful impression. 'When people walk on, it's a signal management really cares,' he said. These things make the all-US crew proud, too, and that leads to better service.

'There's a sense of ownership. This is their boat. They love it,' Waggoner said.

In other recent American Queen work, the decks were stripped down, leveled and sealed. They used to be green. Now they're gunmetal.

The luxury suites, high up and forward, under the pilot house, got new lighting and tile repairs, and their verandas were made private. The top deck, housing a small pool and gym, 'used to be our Siberia,' as Waggoner put it. Now it sports nice indoor-outdoor carpet, inspired by that used on AmaWaterways. The pool and gym were repainted, and four cabanas will be installed, plus upscale furniture, to make a comfortable place for an alfresco drink.

AQSC plans to develop the aft River Grill & Bar, as aboard the company's Pacific Northwest paddlewheeler, American Empress, which Waggoner described as a 'huge, huge, huge hit' as an alternative dinner venue. Currently, on American Queen, it's just a bar. An architect is drawing designs for the space, which would be partly enclosed with glass walls.

If this project advances in the coming years, transforming the River Grill & Bar into a third restaurant (after the grand J.M. White Dining Room and the casual indoor-outdoor Front Porch Cafe), American Queen will have adequate capacity to switch to open-seating dining, AQSC president Ted Sykes said.

Meanwhile, next year, it's Waggoner's wish to improve the space with Bolidt decking.

Most of the paddlewheeler's original floral wallpaper has been replaced by more sophisticated patterns. The thick carpets are new, and with these, casters were added to the dining room chairs to make them easier to move.

Three new self-serve Bunn gourmet espresso machines, at $14,000 a pop, were installed on board. There's even a new steamboat model in the Mark Twain Gallery, of the historic Gordon C. Greene.

Besides the interior and cosmetic improvements, some $1m went into mechanical upgrades, including $250,000 for the elevators. Throughout, new door thresholds were installed for easier wheelchair access, too.

The total $2m of refurbishments over 42 days caps $12m the company has put into American Queen over the last five years, since bringing the vessel back into service following its previous owner's collapse.

Last year AQSC built a sturdy new paddlewheel shaft, and the Front Porch Cafe was remodeled with a new bar, counters, lighting, tile flooring and more. Over three years, all furniture on board has been reupholstered. The boat has new china and stemware, including chargers that depict American Queen.

Waggoner and Sykes are proud of the improvements, and say the paddlewheeler is in the best shape now, cosmetically and technically, since it was built in 1995.

The work, on matters big and small, will continue.

'For us, it's a relentless pursuit of perfection,' Waggoner said.