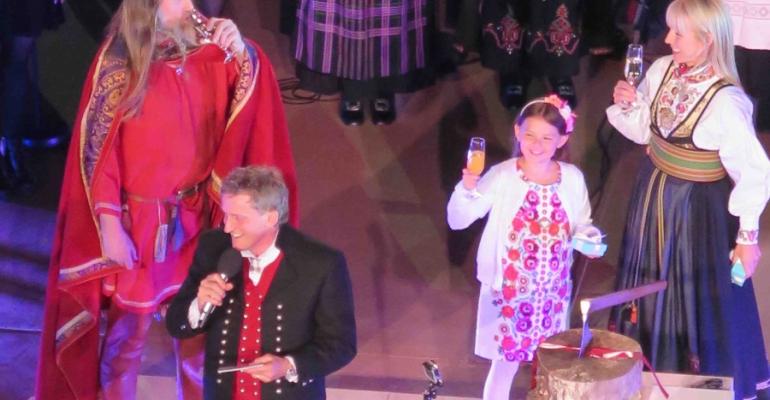 Godmother Karine Hagen, at right, her goddaughter Maya and the red-caped Viking Geir Magne Røvik toast the naming of Viking Sea (Photo: Anne Kalosh)
With the chop of a historic Viking axe releasing a bottle of aquavit to smash against the hull, Viking Sea was named in a colorful and emotional ceremony rife with Viking themes Thursday night at Greenwich on the Thames.

Wearing a bunad, Norway's national costume, Karine Hagen, daughter of Viking Cruises founder Torstein Hagen, served as the godmother. She was accompanied by her goddaughter, Maya, and a tall, bearded, crimson-caped Viking.

The dashing Geir Magne Røvik presented a replica of the historic axe, one of seven that had been unearthed near the London Bridge, and possibly used in 1014 when Vikings battled nearby.

Recalling her late grandmother, Mamsen, Karine Hagen addressed her father Torstein: 'I know she would be incredibly proud of the company you built, Papa.'

Instead of the traditional Champagne, a bottle of Mamsen's favorite Gammel Opland aquavit—the Norwegian 'water of life'—was used in the naming.

After the aquavit smash, Torstein Hagen joined his daughter on the bow of the ship for a toast. A choir from the Norwegian Seaman's Mission sang the Norwegian national anthem, then fireworks exploded from barges flanking Viking Sea, lighting up the Thames.

And Karine Hagen's golden labrador, Finse—the hero in her children's travel books—put in an appearance, too.

The 47,800gt, 930-passenger Viking Sea is the largest ship ever launched in London.

Among those at the naming festivities was Viking Ocean Cruises' naval architect, Jon Rusten. 'It's a privilege to be a part of something like this. It's a great company,' he told Seatrade Cruise News.

And the reception to Viking's ocean ships, Rusten added, has been 'unbelievable, beyond anything we expected.'

(More images from the festivities are on Twitter @SeatradeInsider.)