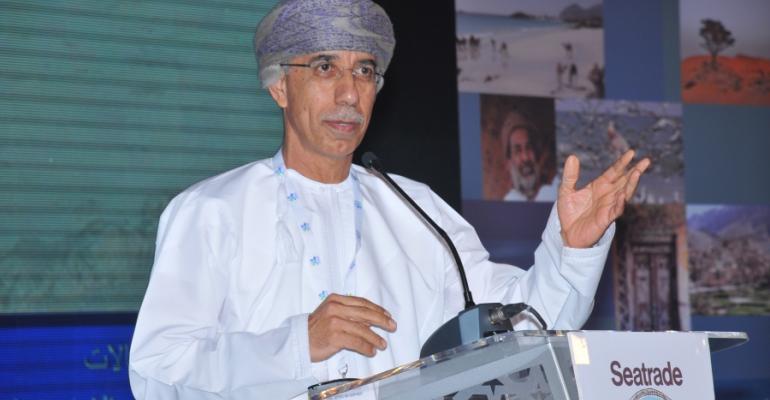 Saud bin Ahmed Al Nahari, ceo Port Services Corp, Oman talking at the Seatrade Middle East Cruise Forum
Several significant inroads have been made across the Arabian Gulf in the past year in port infrastructure, immigration procedures, local market sourcing and product development to strengthen the appeal and widen the reach of cruise tourism in the region and tempt more cruise lines to call.

At today’s Middle East Cruise Forum in Muscat, Oman over 100 delegates heard about the ongoing efforts of  Cruise Arabia - a collaborative initiative formed by Oman’s Ministry of Tourism, Abu Dhabi Tourism & Culture Authority and Dubai’s Department of Tourism and Commerce Marketing to jointly promote the Arabian Gulf as a cruise destination. Officially announced in March 2014, Qatar has announced it is to join the partnership.

Regarding port infrastructure developments: Tomorrow sees the official inauguration of Dubai’s third cruise terminal - a permanent structure of 27,000 sq mtr the largest in the region and replacing the tented structure at Port Rashid, whilst Abu Dhabi has started construction of a new cruise terminal at Port Zayed which will be ready by 3Q, 2015.

In Oman, Muscat’s Port Sultan Qaboos has started moving its cargo handling activities to another zone in order to make it a dedicated cruise and leisure craft facility. Cruise infrastructure developments are also taking place at Khasab and Shinas whilst berthing for cruise and leisure vessels is included in the 20 year vision for the development of Salalah port commented Saud bin Ahmed Al Nahari, ceo Port Services Corp, Oman.

The easing of some long standing immigration issues saw the UAE launching  a multiple-entry visa for cruise passengers which took effect on August 1 allowing cruise tourists to enter the UAE multiple times though any of its ports.

Hamad M. bin Mejren, executive director Dubai Tourism, Department of Commerce and Tourism Marketing called it, ‘an unprecedented ruling which is being welcomed by travel agents and cruise lines alike.’

DTCM believes the new visa will open up access for several emerging source markets with China and India identified as a priority.

Dubai is expecting 450,000 passengers a year by 2016 and believes the multiple entry visa will spearhead further growth with 1m cruisers targeted by 2020.

Cruise Arabia has been undertaking road shows across the GCC to educate travel agents on the selling of cruise holidays on ships operating in local waters and targeting emerging source markets by visiting three major cities in China earlier this month and will be conducting a four city visit to India next week.

The importance of educating travel agents about cruising the Middle East and its varied offerings must not be underestimated commented both Helen Beck, regional director international representatives EMEA, Royal Caribbean International, Celebrity and Azamara Beck and Costa Cruises’ director of sales and marketing Dario Rustico.

‘We want to grow all elements of our sourcing, both the traditional European markets, the emerging markets in Asia but also it is important that we source more locally sourced passengers but we more work to do to create the right mind-set among travel agents and local consumers that ex- Gulf cruising can be attractive,’ remarked Rustico.

On Costa Serena’s Gulf sailings this winter the line has allocated a number of cabins to accommodate any local demand for shorter 4-5 night sailings (whilst continuing to market it as a 7 day itinerary) and ‘we are closely monitoring this’, he added.

Also highlighted in the past has been the need to expand the shore excursion offering across the region and Abu Dhabi has risen to the challenge by introducing a new beach anchor destination at the private island of Sir Bani Yas.

Mike Pawlus, director of strategic itinerary planning at Silversea Cruises, which has been visiting the Gulf for many years mostly whilst transiting between Asia and Europe noted, ‘the availability of quality ports in the region is growing.’

Silversea is marketing a cruise in 2016 featuring a two day stay in Abu Dhabi timed around the Formula 1 Grand Prix, calls also in Dubai and Muscat and then calling in India, Maldives, Mahe and ending in Mombasa.

The panellists agreed that whilst these achievements have been ground breaking, there is still more work to be done.

Whilst the UAE’s multiple-entry visa is applauded by the lines it is acknowledged as a first step and a number called for the introduction of a broader GCC-wide visa for cruise visitors to the region.

Ports and destinations were also urged to keep watching and learning from what the cruise lines are implementing in terms of both new tonnage and technology. Beck referenced the Quantum of the Seas which will visit Muscat and Dubai next May enroute to China and spoke of the check-in process using tablets and urged ports to make sure they also adapt and keep up with the cruise line developments.

With competition from the Mediterranean, Asia and Caribbean as alternative winter cruising destinations, cruise execs encouraged Arabian ports to make sure they are competitive on the cost side, whilst also offering high-revenue generating opportunities on the shorex front to ensure the region remains attractive for cruise lines to keep tonnage here.

Caution was expressed regarding guiding training and the quality and sufficient numbers of multiple language guides. ‘The tour guide is the business card for your country so make sure they make a good first and lasting impression on your behalf,’ commented TUI Cruises’ director port operations, shore excursions and ground handling Tine Oelmann, who informed the audience that the German operator’s Mein Schiff 2 will be returning to the Gulf in 2015/16 and will bring the bigger Mein Schiff 3 in 2016/17.