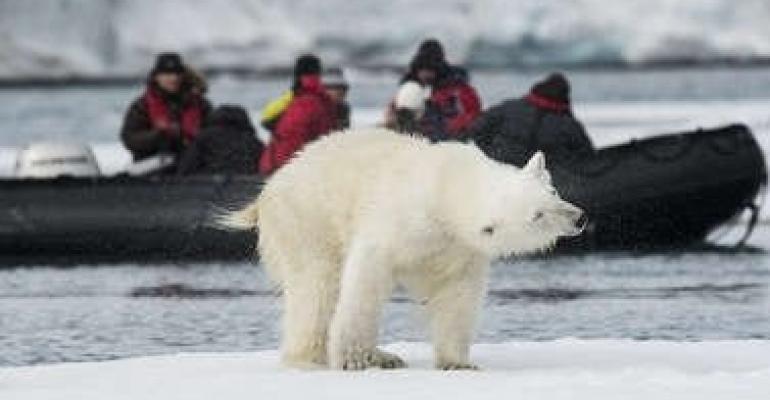 Amid public outcry over the shooting of a polar bear in Svalbard after it attacked a Hapag-Lloyd Cruises bear guard, the Association of Arctic Expedition Cruise Operators said 'the expedition cruise industry takes polar bear safety extremely seriously.'

AECO was compelled to comment even though Hapag-Lloyd Cruises is not a member. The German company, which has operated in the Arctic since 1993, was a member up until a few years ago but a Hapag-Lloyd spokesman said it 'decided to leave the organization for the time being due to some differences of opinion.'

AECO noted that Svalbard, and the high Arctic in general, is a region where wildlife habitats and human settlements overlap. As a result, there are encounters between polar bears and humans. Thanks to strict safety protocols and regulations, polar bear attacks are extremely rare. However, such attacks sometimes occur and may have tragic outcomes.

In Saturday's case, the guard sustained moderate injuries and the bear was killed. According to Hapag-Lloyd Cruises, the guard—part of a four-person team preparing for a shore trip by passengers from Bremen, was 'unexpectedly attacked by a polar bear that had not been spotted' and when the other guards were unable to deter the bear, it was shot in self-defense. The line expressed its extreme regret for the incident.

Expedition cruising is a growing part of the tourism in Svalbard. Year-round land-based and summer sea-based tourism brings more than 100,000 visitors every year.

'It is very sad when an incident leads to human injuries and the death of a polar bear,' AECO said, adding its objective is to ensure that expedition cruises and tourism in the Arctic are carried out with the utmost consideration for the vulnerable, natural environment, local cultures and cultural remains, as well as the challenging safety hazards at sea and on land.

The association characterized Svalbard as a popular and well-regulated tourism destination, and said incidents involving the cruise industry are rare. Expedition cruise tourism in Svalbard is subject to strict regulations and is closely monitored by the governor of Svalbard.

In accordance with Article 30 of the Svalbard Environmental Protection Act, it is prohibited to lure, pursue or otherwise seek out polar bears in such a way as to disturb them or expose either bears or humans to danger. The governor of Svalbard enforces this law and investigates incidents where polar bears may have been disturbed.

The incident involving Hapag-Lloyd's Bremen is under investigation by the governor's office.

AECO said it has several guidelines and standards that go beyond legal requirements to further advance safe and environmentally friendly cruise tourism. Members are subject to a strict non-disturbance principle concerning wildlife, and the association has developed mandatory polar bear guidelines that provide detailed instructions on how to avoid encounters with and disturbance of bears.

These include always keeping a distance, having a plan and being ready to act to avoid encounters by implementing safety measures beforehand. Before undertaking shore excursions, operators are required to check out the terrain, do reconnaissance and look out for polar bears before any passenger comes ashore. It appears that is just what the Bremen guard team was doing at the time of the attack.

AECO members are also required to establish a polar bear watch system and stay in places where there is good visibility of the surrounding area. Guides carrying firearms and other bear deterrents must lead groups.

The polar bear guidelines are here.